[SatNews] It was this years’ fifth launch with use of the Proton carrier and the first launch after the accident...

Russian relay satellite Luch, launched by the Proton-M carrier rocket from Baikonur space launch facility early on Sunday, has separated from the Briz-M rocket booster and reached the calculated orbit, the press service of the Russian Space Agency (Roskosmos) reported on Sunday. 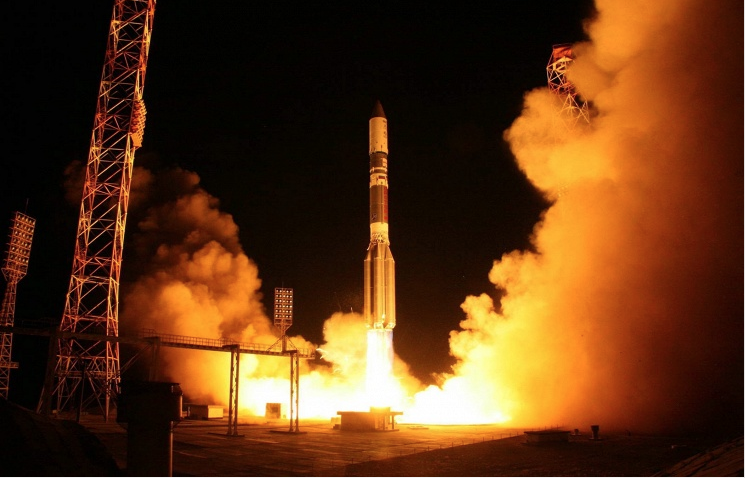 “The space apparatus has separated in scheduled time,” the press service said. The Proton launch vehicle carried a classified payload known as Olymp (“Olympus”) as well as Luch (“Beam”), which belongs to the Russian Ministry of Defense.

It was this years’ fifth launch with use of the Proton carrier and the first launch after the accident with the carrier. Sunday’s mission was previously scheduled to lift off at the latter half of May 2014. However,  following the loss of another Proton rocket on May 16, it was postponed to July 8. The Express-AM4P communication satellite was lost some 545 seconds into the flight. The experts investigating that accident said it was caused by disintegration of a bearing assembly in the turbo pump of the Proton’s third-stage engine.

Previous to that on August 23, 2013, a Proton rocket with several GLONASS (Russia’s version of the Global Positioning System) cartwheeled across the sky before slamming into the ground in a massive fireball. It was later determined that a sensor emplaced upside down doomed the $1.3 billion mission.

The Luch spacecraft is another satellite of the Luch Multifunctional Relay System which is being developed under the 2006-2015 Russian federal space program. The Luch relay system is intended to provide the Russian segment of the International Space Station (ISS); low-orbiting space devices; boosters and upper stages with communication with ground-based facilities.

The Russian segment of the International Space Station (ISS) can communicate directly with the mission control centres in Russia and in the U.S. for 2.5 hours a day. For communication outside the time limit, Russia buys services of the U.S. Tracking and Data Relay Satellite System.

The previous Luch spacecraft, Luch-5B, was successfully put in orbit on April 28 this year.