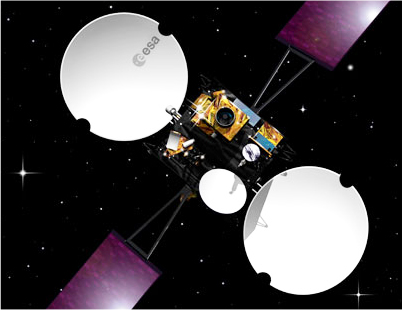 ...to ensure the safe arrival of Europe’s third Automated Transfer Vehicle at the International Space Station with vital supplies. Containing fresh supplies of fuel, water, oxygen, air, food, clothing, experiments and spare parts, ATV Edoardo Amaldi is a true lifeline to the astronauts on the Space Station. A prompt arrival is critical for the orbital outpost.

Artemis is dedicated to ATV-3 throughout the vessel’s free-flying phase up to the docking with the Station Wednesday night. NASA’s own satellites provide backup to Artemis during the attached phase, while Artemis will act as backup during the other phases and in emergency situations. Artemis is handling communications between Edoardo Amaldi and the ATV Control Centre in Toulouse, France. Hovering some 36,000km above the equator at 21.4 degrees East—directly over the Democratic Republic of the Congo—Artemis is routing telemetry and commands to and from the control centre whenever the satellite has the Station or ATV in its view.

As ATV-3 circles the globe, Artemis has close to 40 minutes of continuous contact at a time. The first two ATV missions were also supported by Artemis. Working in parallel with NASA, Artemis was used as the main relay while the ATVs were attached to the Station and provided back up for commands and telemetry during rendezvous, docking, undocking and reentry. ESA’s first data-relay satellite has been orbiting Earth for more than 10 years and pioneered many of the advances used in SATCOMs today. Artemis created the first laser data link between satellites in different orbits; it was the first telecommunications satellite to be extensively reprogrammed in orbit; it was the first to power its way to geostationary orbit, 36,000km up, with ion thrusters after surviving the longest-ever drift to its destination. Artemis is the precursor to Europe’s new European Data Relay System, now being built in a public–private partnership between ESA and Astrium Services.