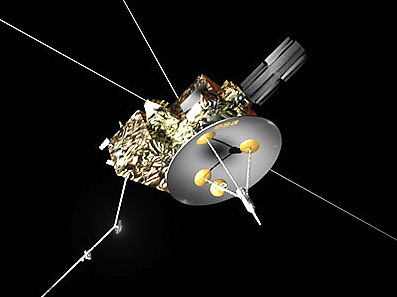 Upon receipt of the last command from Earth, the transmitter on Ulysses will switch off on June 30th, bringing one of the most successful and longest missions in spaceflight history to an end.

After 18.6 years in space and defying several earlier expectations of its demise, the joint ESA/NASA solar orbiter Ulysses will achieve 'end of mission' on that date. The final communication pass with a ground station will start at 17:35 CEST and run until 22:20 CEST (15:35-20:20 UTC) or until the final command is issued to switch the satellite's radio communications into 'monitor only' mode. No further contact with Ulysses is planned. Ulysses is the first spacecraft to survey the environment in space above and below the poles of the Sun in the four dimensions of space and time. Among many other ground-breaking results, the hugely successful mission showed that the Sun's magnetic field is carried into the Solar System in a more complicated manner than previously believed. Particles expelled by the Sun from low latitudes can climb up to high latitudes and vice versa, even unexpectedly finding their way down to planets. The shut-down of the satellite is a joint decision of the two agencies and comes a year after the mission was expected to end. A year ago, the satellite's power supply had weakened to the point that it was thought the low temperatures would cause the fuel lines to freeze up, rendering Ulysses uncontrollable. Final mission operations will be conducted from the Ulysses Mission Support Area (MSA) located at NASA's Jet Propulsion Laboratory in California, U.S.A. The joint team will include Nigel Angold, ESA Mission Operations Manager, and Ed Massey, NASA Project Manager, as well as a number of engineers and analysts from both Agencies. After shut-off, Ulysses will continue to orbit the Sun, becoming in effect a man-made 'comet'.