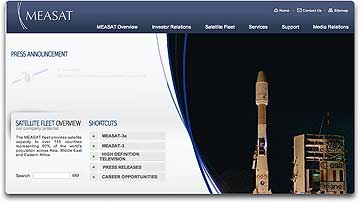 They make it sound so easy but imagine MEASAT Satellite Systems Sdn. Bhd. announced today that the MEASAT-3a satellite has been successfully moved to the 91.4°E Orbital Slot in preparation for In-Orbit testing. The relocation of the satellite to the 91.4°E was achieved after the completion of transfer orbit operations and the successful deployment of the satellite’s solar arrays and reflectors.

After the completion of In-Orbit testing, expected during the third week of July, MEASAT-3a will be moved into the 91.5°E orbital slot where, collocated with MEASAT-3, the satellite would support the continued growth of the MEASAT customer base.