ULA Anticipates Being Advanced And Getting Extremely High (Launch) 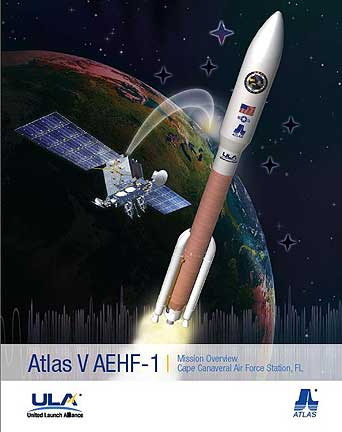 [SatNews] Preparation is 95 percent of most projects from painting to rocket launches, and so ULA has been ramping up for the Atlas V launch of the Advanced Extremely High Frequency-1 (AEHF-1) satellite for the Air Force currently scheduled for August 12 from Space Launch Complex-41, Cape Canaveral AFS, Florida. The launch window for the mission is 7:13 – 9:13 a.m. EDT.

ULA will provide a live TV broadcast beginning 20 minutes prior to launch at 6:53 a.m. EDT. A simulcast of the launch will be available to be viewed on the ULA website at when the actual launch begins. Keep in mind, spacecraft separation comes at 51 minutes after launch so the broadcast and all external audio and video feeds will end approximately 55 minutes after the launch.

Jim Sponnick Vice President, Mission Operations shares, "The ULA team is proud to be the launch provider for the Advanced Extremely High Frequency-1 (AEHF-1) satellite. The AEHF satellites are the next generation of global, high-security, survivable communications satellites that will be used by all branches of the United States military.

"AEHF satellites are the follow-on to the Department of Defense’s current five-satellite Milstar communications constellation. When fully operational, the Advanced EHF constellation will consist of four crosslinked satellites for the user.

"The Air Force’s Military Satellite Communications Systems Wing (MCSW) is the lead agency responsible for managing the AEHF contract. MCSW ensures that the secure communications capabilities of this system are made available to military personnel around the globe. AEHF-1 was designed and built for the U.S. Air Force by the Lockheed Martin Corporation.

"My thanks to the entire team for its dedication in bringing AEHF-1 to launch and to the Air Force for selecting the ULA team to launch this important national security mission. Go Atlas, Go Centaur, Go AEHF-1!" 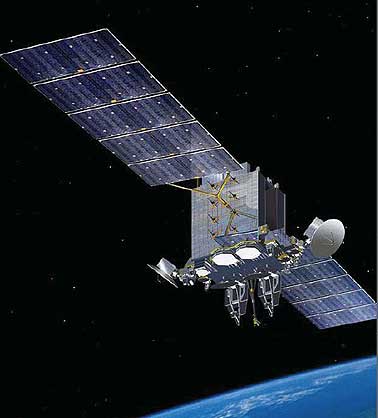 Photo Courtesy of Lockheed Martin Corporation
The AEHF System is a joint service satellite communications system that will provide survivable, global, secure, protected, and jam-resistant communications for high-priority military ground, sea and air assets. Advanced EHF will allow the National Security Council and Unified Combatant Commanders to control their tactical and strategic forces at all levels of confl ict through general nuclear war and supports the attainment of information superiority.

The AEHF System is the follow-on to the Milstar system, augmenting and improving on the capabilities of Milstar, and expanding the MCSW architecture. It will provide connectivity across the spectrum of mission areas, including land, air and naval warfare; special operations; strategic nuclear operations; strategic defense; theater missile defense; and space operations and intelligence. The AEHF system will consist of four satellites in geosynchronous earth orbit (GEO) that provide 10 times the throughput of the Milstar satellites with a substantial increase in coverage for users.

The AEHF system is composed of three segments: space (the satellites), ground (mission control and associated communications links), and terminals (the users). The segments will provide communications in a specified set of data rates from 75 bps to approximately 8 Mbps.

The space segment consists of a cross-linked constellation of four satellites. The mission control segment controls satellites on orbit, monitors satellite health, and provides communications system planning and monitoring. This segment is highly survivable, with both fixed and mobile control stations. System uplinks and crosslinks operate in the extremely high frequency (EHF) range and downlinks in the super high frequency (SHF) range. The terminal segment includes fixed and ground mobile terminals, ship and submarine terminals, and airborne terminals used by all of the services and international partners (Canada, Netherlands, and UK).