Watch The ISS... For Yourself! 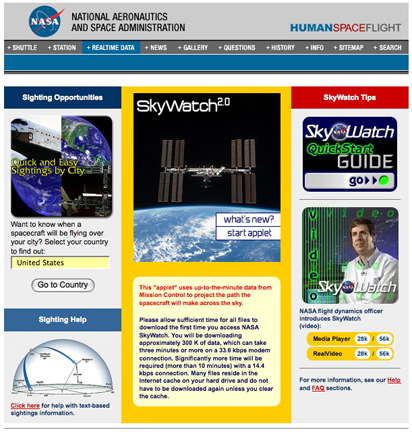 As America celebrates its 233rd birthday this holiday weekend, there will be an extra light in the sky along with the fireworks. Across the country, Americans will be treated to spectacular views of the International Space Station as it orbits 220 miles above Earth.

Many locations will have unusually long sighting opportunities of as much as five minutes, weather permitting, as the station flies almost directly overhead. To find out when to see the station from your city, visit http://spaceflight.nasa.gov/realdata/sightings. The largest spacecraft ever built, the station also is the most reflective. It will be brighter than most stars at dawn and dusk, appearing as a solid, glowing light, slowly traversing the predawn or evening sky. It is visible when lit by the sun while the ground below is not in full daylight. It moves across the sky too fast for conventional telescopes, but a good set of binoculars can enhance the viewing experience, even revealing some detail of the station's structure. The station circles Earth every 90 minutes. It is 357 feet long, about the length of a football field including the end zones, and 45 feet tall. Its reflective solar arrays are 240 feet wide, a wingspan greater than that of a jumbo jet, and have a total surface area of more than 38,000 square feet. An international crew of six astronauts, including American flight engineer Michael Barratt, is aboard the complex conducting research and continuing its assembly. Other crew members are from Russia, Europe, Canada and Japan.