[SatNews] The sensor is so precise that it can pick up the twinkle of a light on a ship at sea.

While you were sleeping, it would seem the U.S. is basically dark, right? Not really, as NASA captured the spectacular shots with the help of a newly launched NASA-NOAA satellite that has a sensor that can observe the planet at night. And the picture is stunning: Spin west to east across the U.S. and you see the brightness of Seattle, Portland and Los Angeles giving way to the Great Basin and the Rockies; the ordered grid of Midwestern cities and counties draw lines of lights to Dallas and Chicago.

And down in the Gulf of Mexico, ships and oil rigs dot the water.

Bright city lights, raging wildfires and unexpected gas flares illuminate the cloud-free photos released Wednesday by NASA. The satellite collected 2.5 terabytes of data in 312 orbits of the planet "to get a clear shot of every parcel of Earth's land surface and islands." 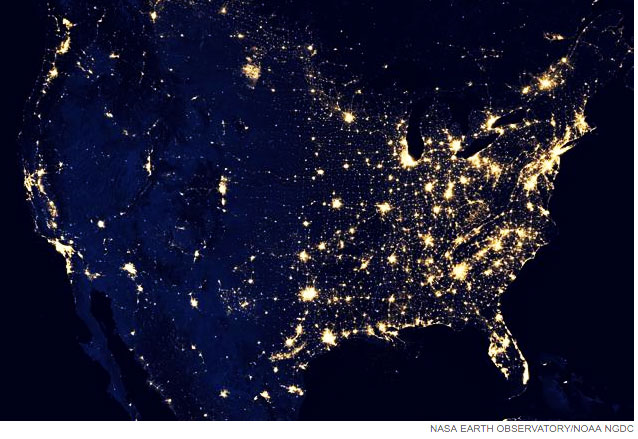 NASA Earth Observatory/NOAA NGDC A composite map of the world shows lights twinkling all over the globe at night.

"For all the reasons that we need to see Earth during the day, we also need to see Earth at night," Steve Miller, a researcher at NOAA's Colorado State University Cooperative Institute for Research in the Atmosphere, said on NASA’s website.

"Unlike humans, the Earth never sleeps. The night is nowhere as dark as we might think," Miller added."

The sensor is so precise that it can pick up the twinkle of a light on a ship at sea. It can even pinpoint the Nile River in darkness.

The sensor also caught Superstorm Sandy as it made landfall in New Jersey on October 29, providing moonlight images of lower Manhattan and the Rockaways, both darkened by power outages.

In addition to taking eye-catching pictures of the planet, NASA says the sensor will improve the organization’s ability to forecast weather patterns at night.

The satellite gives scientists clearer pictures of storms, fogs and other conditions.