Europe is Designing Satellites that 'Surf' their Way Past Space Debris

Europe is designing satellites that 'surf' their way past space debris.
Image ESA

Humans routinely send spacecraft into orbit to ensure services on the ground and to explore other planets. This extraordinary ability comes with a great responsibility: our space activity risks contaminating the space surrounding the Earth, but also other planets and moons that have potential for past or present life.

Space benefits humanity by making many of our activities on Earth possible: telecommunication, weather forecasting, geolocation through the global navigation satellite system used for ground, maritime and air traffic, as well as remote sensing for monitoring the health of our planet. At the same time, scientific missions increase our knowledge of our solar system, while enabling the development of new technologies, science and space exploration.

However, increased space activity comes at a cost, both in terms of fuel consumption for spacecraft and space debris produced. This debris is in the form of spacecraft abandoned at the end of its operational life, or remainders of space missions and upper stages of launchers, along with all the fragments resulting from collisions and explosions in orbit.

The very existence of the more than 900,000 pieces of debris larger than 1 centimeter in size – large enough to damage operational satellites due to their high orbital speed – poses a serious threat to the sustainability of space activities. The amount of space debris has been rising exponentially, according to the European Space Agency (ESA).

Interestingly, the growth in space debris has followed a similar trend to many other environmental stressors such as carbon dioxide, ocean acidification, tropical forest loss and terrestrial biosphere degradation. Indeed, all these issues have several aspects in common. Given their global nature, the solutions require strong international cooperation for defining mitigation measures. Indicators of this problem that are relevant, accepted, credible, easy to monitor and robust against manipulation and errors must be agreed upon internationally. 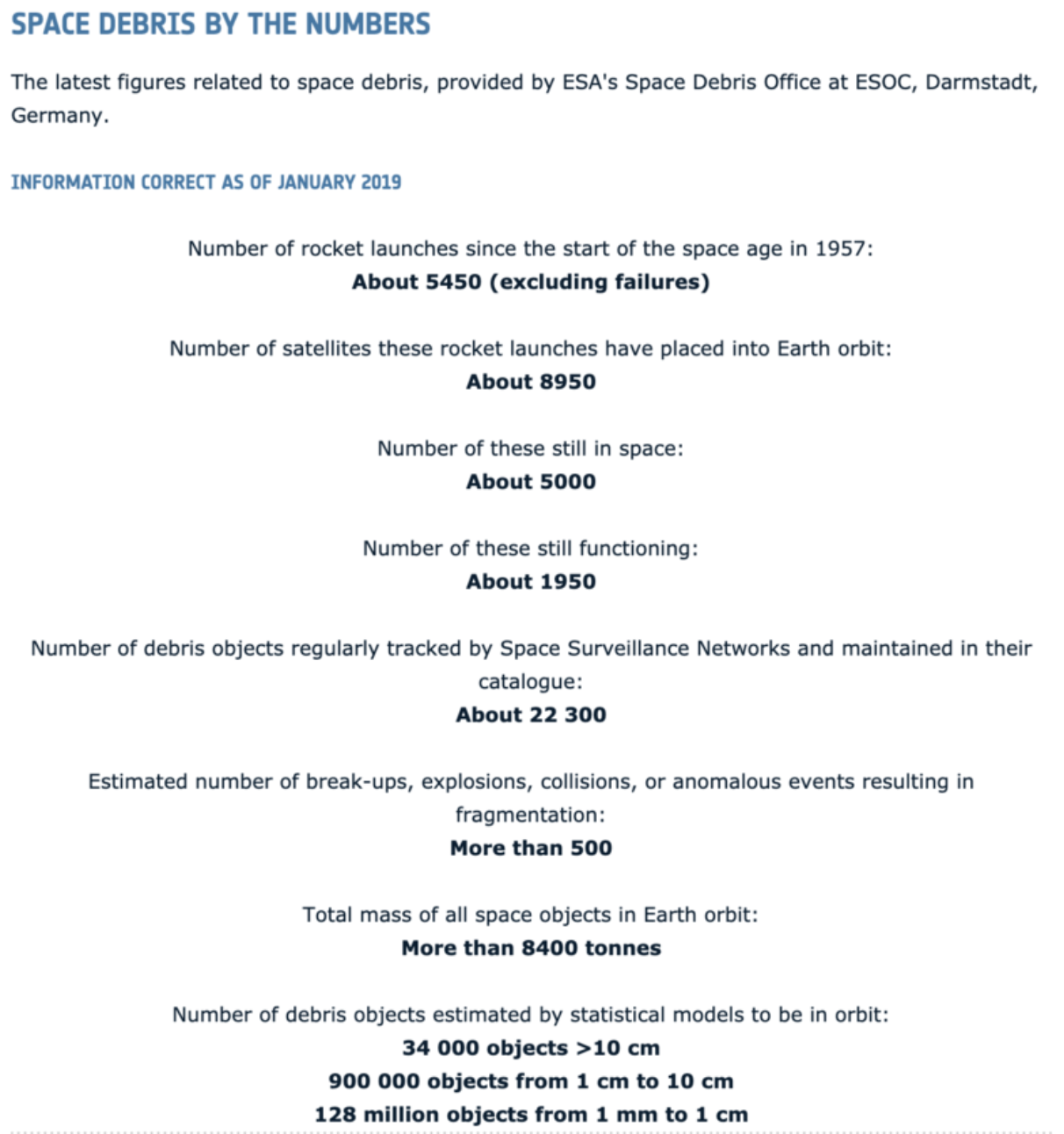 There are more than 8,400 tonnes of space junk in Earth's orbit Image: ESA

The space debris problem also compels us to use radar and visual telescopes to determine the orbit of space debris, and to develop mathematical and numerical approaches to model their evolution in space and time, as well as tools for collision-avoidance and end-of-life manoeuvres. Many uncertainties must be taken into account in the predictions, such as the Earth’s atmosphere and its interaction with the solar activity, the physical characteristics of uncooperative objects, and untraceable fragments, which make it impossible to achieve a perfect prediction of the debris’ orbit and evolution.

Making satellites that “surf” in space

Current space activities are enabled by space transfers that allow reaching and controlling operational orbits. Moreover, they are safeguarded by space-situation awareness. Orbit perturbations – natural forces due to the gravity of the moon and the sun, atmospheric drag and solar radiation pressure – affect the long-term evolution of the orbit of celestial bodies, satellites and space debris and need to be counterbalanced by satellite orbit manoeuvres, which increases their fuel requirements. However, the COMPASS project funded by the European Research Council aims to radically alter the current space mission design by exploiting natural and artificial orbit perturbations rather than counteracting them. My teamat Politecnico di Milano is jointly working on the project to develop methods that could allow satellites to “surf”, exploiting the forces of nature to reach their desired orbit while avoiding collisions. This would mean significantly reducing fuel consumption. The long-term outcome would be to considerably reduce the high cost of space missions and to create new opportunities for space exploration and exploitation.

Space debris objects can be modeled as a continuum fluid to assess the most populated orbits in which the risk of collision is higher. Maneuvers to avoid such collisions are designed for autonomous in-orbit operations. At the end of their lives, satellites can be maneuvered towards re-entry by surfing through natural orbit perturbations - and the INTEGRAL satellite demonstrates this is possible. These natural forces also play an important role when two objects fly close to each other during on-orbit servicing and inspection, and during active debris removal.

However, space debris is not limited to low-Earth orbit. Upper stages and satellites, due to failure, can also become debris in orbit around the sun. Indeed, for all interplanetary missions, planetary protection analysis must be performed to verify that, during the trajectory of the spacecraft, the collision probability with other moons and planets is below a given threshold.

Our project aims to radically alter the way space missions are currently designed by exploiting natural and artificial orbit perturbations rather than counteracting them. The long-term outcome will be to significantly reduce the high cost of space missions, and to create new opportunities for space exploration and space debris mitigation.