In a recent test, NASA’s James Webb Space Telescope fully deployed its primary mirror into the same configuration it will have when in space. 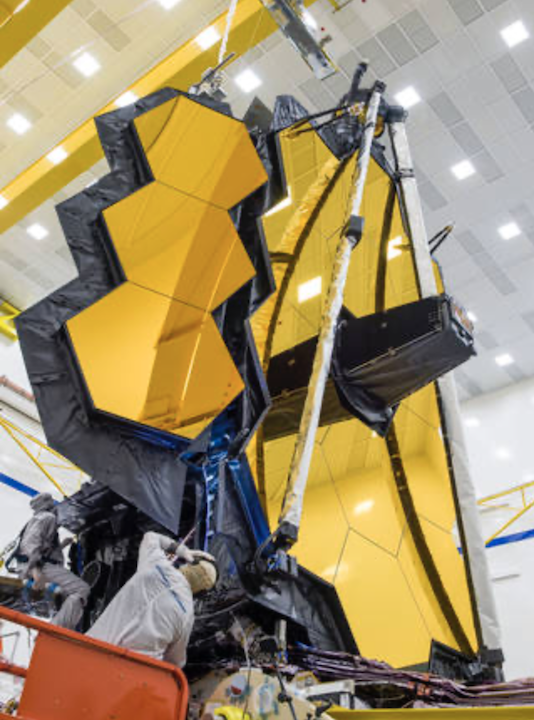 As Webb progresses towards liftoff in 2021, technicians and engineers have been diligently checking off a long list of final tests the observatory will undergo before being packaged for delivery to French Guiana for launch. Performed in early March, this procedure involved commanding the spacecraft’s internal systems to fully extend and latch Webb’s iconic 21 feet 4-inch (6.5 meter) primary mirror, appearing just like it would after it has been launched to orbit. The observatory is currently in a cleanroom at Northrop Grumman Space Systems in Redondo Beach, California. The difficulty and complexity of performing tests for Webb has increased significantly, now that the observatory has been fully assembled. Special gravity offsetting equipment was attached to Webb’s mirror to simulate the zero-gravity environment its mechanisms will have to operate in. Tests like these help safeguard mission success by physically demonstrating that the spacecraft is able to move and unfold as intended. The Webb team will deploy the observatory’s primary mirror only once more on the ground, just before preparing it for delivery to the launch site.

A telescope’s sensitivity, or how much detail it can see, is directly related to the size of the mirror that collects light from the objects being observed. A larger surface area collects more light, just like a larger bucket collects more water in a rain shower than a small one. Webb’s mirror is the biggest of its kind that NASA has ever built.

In order to perform groundbreaking science, Webb’s primary mirror needs to be so large that it cannot fit inside any rocket available in its fully extended form. Like the art of origami, Webb is a collection of movable parts employing applied material science that have been specifically designed to fold themselves to a compact formation that is considerably smaller than when the observatory is fully deployed. This allows it to just barely fit within a 16-foot (5-meter) payload fairing, with little room to spare.

“Deploying both wings of the telescope while part of the fully assembled observatory is another significant milestone showing Webb will deploy properly in space. This is a great achievement and an inspiring image for the entire team,” said Lee Feinberg, optical telescope element manager for Webb at NASA’s Goddard Space Flight Center in Greenbelt, Maryland.

The evolving novel coronavirus COVID-19 situation is causing significant impact and disruption globally. Given these circumstances, Webb’s Northrop Grumman team in California has resumed integration and testing work with reduced personnel and shifts until the Deployable Tower Assembly set up in April. The project will then shut down integration and testing operations due to the lack of required NASA onsite personnel related to the COVID-19 situation. The project will reassess over the next couple of weeks and adjust decisions as the situation continues to unfold.

The James Webb Space Telescope will be the world’s premier space science observatory when it launches in 2021. Webb will solve mysteries in our solar system, look beyond to distant worlds around other stars, and probe the mysterious structures and origins of our universe and our place in it. Webb is an international program led by NASA with its partners, ESA (European Space Agency) and the Canadian Space Agency.