More than $300 billion worth of satellites are estimated to be in the geosynchronous orbit (GEO—22,000 miles above the zEarth). Many of these satellites have been retired due to normal end of useful life, obsolescence or failure; yet many still have valuable components, such as antennas, that could last much longer than the life of the satellite. When satellites in GEO “retire,” they are put into a GEO disposal or “graveyard” orbit. That graveyard potentially holds tens to more than a hundred retired satellites that have components that could be repurposed – with the willing knowledge and sanction of the satellite’s owner. Today, DoD deploys new, replacement satellites at high cost—one of the primary drivers of the high cost is the launch costs, which is dependent on the weight and volume of antennas. The repurposing of existing, retired antennas from the graveyard represents a potential for significant cost savings. 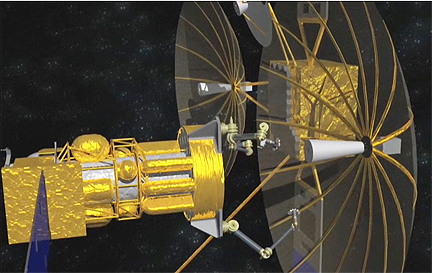 DARPA’s Phoenix program seeks to develop technologies to cooperatively harvest and re-use valuable components from retired, nonworking satellites in GEO and demonstrate the ability to create new space systems at greatly reduced cost. “If this program is successful, space debris becomes space resource,” said DARPA Director, Regina E. Dugan. This concept will require diverse expertise from the international and nontraditional space communities. For example, today’s ground-based robotics systems allow surgeons to perform telesurgery on a patient thousands of miles away, and advanced remote imaging systems used for offshore drilling view the ocean floor thousands of feet underwater. These types of capabilities, if re-engineered for zero gravity, high-vacuum and harsh radiation, could be used in space to allow the repurposing of valuable antennas from retired GEO satellites.

“Satellites in GEO are not designed to be disassembled or repaired, so it’s not a matter of simply removing some nuts and bolts,” said David Barnhart, DARPA program manager. “This requires new remote imaging and robotics technology and special tools to grip, cut, and modify complex systems, since existing joints are usually molded or welded. Another challenge is developing new remote operating procedures to hold two parts together so a third robotic ‘hand’ can join them with a third part, such as a fastener, all in zero gravity. For a person operating such robotics, the complexity is similar to trying to assemble via remote control multiple Legos at the same time while looking through a telescope.”

To optimally use those repurposed assets, the Phoenix program will develop low-cost, scalable electronics and structural modules that would allow localized control and communication with each other and a master satellite, ala DARPA’s System F6, that together harnesses the repurposed antennas. Phoenix specifically seeks technologies for developing a new class of small “satlets,” or nanosatellites, which can be sent more economically to the GEO region through existing ride-along services with commercial satellite launches and then robotically attached to the antenna of a nonfunctional cooperating satellite to essentially create a new space system. The nanosatellites may leverage the technologies, infrastructure, protocols and architecture developed within the ongoing System F6 program.

Technical expertise is sought to design a payload orbital delivery system, or PODS, to safely house the satlets when they are launched aboard a commercial satellite. A separate on-orbit “tender,” or satellite servicing station, is planned to be launched into GEO. Once the tender arrives on-orbit, the PODS would be released from its ride-along host and linked with the tender to become part of the satellite servicing station’s “tool belt.” The tender plans to be equipped with grasping mechanical arms and remote vision systems to remove components and satlets from the PODS using unique space tools to be developed in the program. Critical to the success of the Phoenix program is active participation from both U.S. and international communities involved in vital technical areas such as:
DARPA will host two upcoming industry days in November 2011 for interested performers.