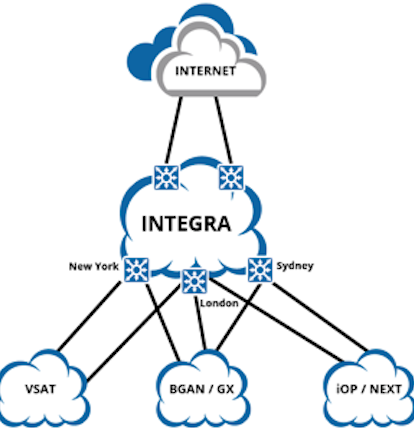 With the growth of satellite terminal deployment and smartphone/tablet usage on satellite communication networks, in conjunction with the increase in encrypted applications which are difficult to identify, AST has developed a traffic management system to create a network that will assist in eliminating potential bill shock, and to allow users to control which applications and how much usage are allowed for specific devices.

The advanced abilities of the network enable users more control than ever before over their devices, usage and routing. For example, limiting a user to 10Mb of data to be used on WhatsApp, or 5Mb of Internet browsing and 5Mb of Facebook data to be used and routed to the Internet via New York.

Automatic software updates and background activity on tablets and smartphones can also be an expensive and unnecessary cost for many, resulting in high costs.  INTEGRA blocks these at the source, ensuring only essential updates are allowed.

With real-time visibility of traffic, alerting and reporting are available in near real-time through INTEGRA, notifications can be sent via email or SMS when any predefined thresholds are reached, and there are no surprises when the bill arrives.

Internet traffic is changing, with more applications using encryption meaning that traditional firewalls are no-longer effective.  Regulating usage has never been more important, INTEGRA allows the user to be aware, and in total control, where encryption is no barrier.