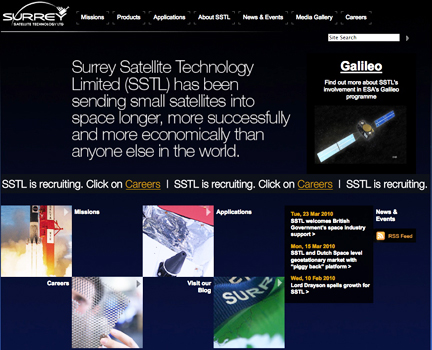 SSTL's homepage...
Surrey Satellite Technology Ltd (SSTL) has welcomed the British Government's response to Lord Drayson's Space Innovation and Growth Strategy report. Lord Mandelson, Secretary of State for Business, Innovation and Skills, announced a program of support that included the launch of the UK's first national space agency, a small satellite program to showcase state of the art technologies to the world, and the formation of a working group to give serious consideration to a dedicated UK Earth observation system.

Space in the UK is an economic success story with more than 10 years consistent growth. In fact, the report estimated that the UK space sector could be worth £40 billion by 2030 and companies such as SSTL have proven their resilience achieving 20 percent growth in the current economic climate. Space is a proven economic enabler — for every pound spent on space missions, the commercial opportunities for Britain's high technology, engineering and ICT sectors are considerably enhanced. The Space Innovation and Growth Strategy report identifies areas where targeted government support and investment will help the UK to increase its international market share while supporting government objectives.

Sir Martin Sweeting, Executive Chairman, SSTL, commented, "Today's announcements are an important step for UK space, which both the space sector and the nation should celebrate. Our space industry is both technologically advanced and highly competitive — we have a successful track record and the UK economy cannot afford to miss out on this growing commercial market. Space is an increasing part of our everyday lives and appropriate government support for innovation by industry before it reaches commercial maturity is critical to ensure that the UK will continue to change the economics of space for the benefit of the nation and the tax-payer."

A new UK Space Agency will implement the national space policy. The agency will be resourced and empowered to maximise the growth of the UK space industry. SSTL is particularly pleased with the Government's announcement that under UK Space Agency, Britain will launch TechDemoSat. Funded by the government's Technology Strategy Board (TSB), with support from the Regional development Agencies (RDAs), the mission will demonstrate the advanced capabilities of state of the art small satellite technology for scientific and commercial applications — something that SSTL has pioneered over many years.

The need for an indigenous UK Earth observation (EO) service will be assessed by a new working group. Since 1981, SSTL has launched 34 satellites as well as providing training and development programmes, consultancy services, and mission studies for ESA, NASA and commercial customers, with its innovative approach that is changing the economics of space. Based in Guildford, UK, SSTL is owned by EADS Astrium NV.