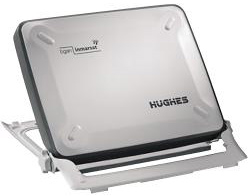 Vizada’s BGAN service is based on its leading global IP network, specifically developed for mobile satellite broadband applications. A team of dedicated engineers constantly improves and upgrades the network in line with requests from customers, which include the world’s largest media companies, government and military bodies, and non-governmental entities. “Our solution is based on the rugged Hughes 9201 BGAN platform, which is one of the highest bandwidth terminals available and supports WLAN connectivity in addition to other standard data interfaces,” confirmed Lars-Steinar Bakke, vice president of Sales, Europe & CIS, Vizada. “It is ideal for either a single user with bandwidth-hungry applications such as live video or for small, remote teams needing a temporary office with high-speed connectivity to the corporate network. Users are no longer constrained by location, as the BGAN service enables full corporate network and Internet access, including email, telephony, streaming and high-speed file transfers.”

The Hughes 9201 BGAN terminal, in combination with Vizada Solutions™, which run over this network, enable any organization to set up a broadband mobile office in minutes from anywhere in the world, providing simultaneous voice and high-speed data access to the Internet and corporate intranets. Rugged and flexible, the Hughes 9201 is designed to operate in extreme conditions, is easy to use in both portable and semi-fixed formats by simply plugging in a phone or laptop, and connects seamlessly to the Internet and corporate intranet via the preferred VPN application.