PerúSAT-1 and SkySat-4 to -7 satellites have been successfully launched by Arianespace with the push occurring at 10:43:35 local time from the Guiana Space Center in Kourou, French Guiana.

The Peruvian space agency CONIDA owns and will operate PerúSAT-1, while the Google company, Terra Bella, will manage the SkySat -4, -5, -6 and -7 smallsats. Designated Flight VV07, this was Arianespace’s seventh launch of the year and also the seventh consecutive successful launch by Vega, the latest member of the Arianespace launcher family, introduced at the Guiana Space Center in 2012. Vega is especially well suited to the dynamic Earth observation market. With this launch it starts full-fledged commercial operation, and already has nine future launches in its order book. 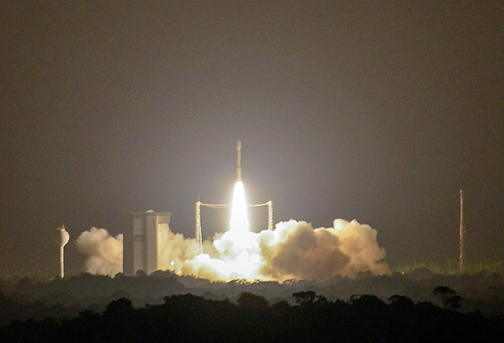 The launch of Flight VV07 with PerúSAT-1 and SkySat-4 to -7 satellites aboard by an Arianespace Vega rocket.

With the complete family of three launch vehicles, Arianespace can launch any type of Earth Observation (EO) or meteorology satellite. Arianespace already has launched 59 satellites for these markets and fully one-fourth of the future launches also target these applications.

PerúSAT-1 is Peru’s first EO satellite and was ordered within the scope of an agreement between the Peruvian and French governments—this launch was carried out under a turnkey contract with Airbus Defence and Space for the Peruvian space agency CONIDA. This optical observation satellite features very high resolution (0.7 meters) and will operate from Sun-synchronous orbit at an altitude of 695 km and will acquire images from across the planet. PerúSAT-1 is the 115th satellite built by Airbus Defence and Space to be launched by Arianespace. The Arianespace order book includes 13 other satellites from this manufacturer, along with an order for the OneWeb constellation (which will be composed of more than 600 satellites). 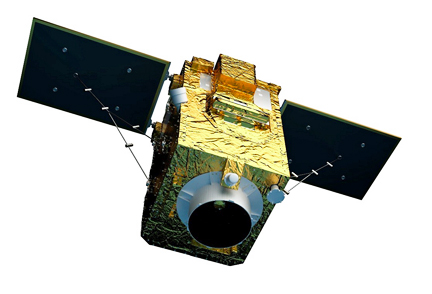 The PerúSAT-1 satellite was built by Airbus Defence and Space in Toulouse, France, using that company's AstroBus-S platform and their NAOMI instrument. PerúSAT-1 weighed 430 kg at liftoff, and offers a design life of 10 years. The satellite was injected into Sun-synchronous orbit at an altitude of 675 km and will be positioned at an operational orbit of 695 km to acquire images of the entire planet.

SkySats-4, -5, -6 and -7 are the first four satellites launched by Arianespace for new customer Terra Bella, a Google company that is a commercial operator of EO satellites. Injected into Sun-synchronous orbit at an altitude of 500 km, these smallsats will provide very-high-resolution (less than one meter) maps of the entire planet. Designed by Terra Bella, the Skysat-4 to -7 satellites were manufactured by SSL (Space Systems Loral) using a dedicated SkySat platform that was produced in SSL’s Palo Alto, California, facility. SkySats-4 to -7 are the 55th to 58th SSL satellites launched by Arianespace. The Arianespace order book includes five more geostationary communications satellites built by SSL. 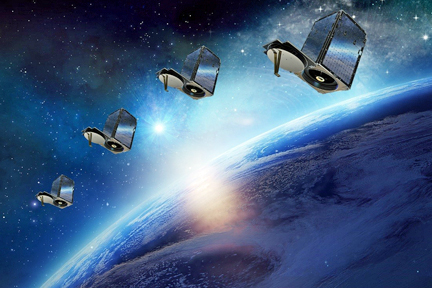 The SkySat-4, -5, -6 and -7 satellites were designed by Terra Bella and built by SSL (Space Systems Loral) using a dedicated SkySat platform, in Palo Alto, California (United States). Each satellite weighed 110 kg at liftoff. They were placed in Sun-synchronous orbit at an altitude of 500 km, and will provide very-high-resolution (less than one meter) 3D mapping of the entire planet.

Vega is a European Space Agency (ESA) program, jointly funded by Italy, France, Spain, Belgium, the Netherlands, Switzerland and Sweden. Avio is the launcher design authority and industrial prime contractor, operating through its Italian subsidiary, ELV (in which the Italian space agency ASI has a 30 percent stake). Arianespace markets and operates Vega from the Guiana Space Center alongside the firm's two other launchers, Ariane 5 and Soyuz, enabling the company to address the full range of market needs.

Vega’s six previous missions prior to Flight VV07 were all carried out for institutional customers (European Space Agency-ESA / European Commission / national space agencies / governments). These six missions, all successful, fully demonstrated the launcher’s operational capabilities and versatility, with missions to low Sun-synchronous orbit (Sentinel-2A), a ballistic trajectory (IXV), and transfer orbit to the Lagrange point L1 (LISA Pathfinder), for a wide variety of applications (Earth observation, science, education, defense). The successful LISA Pathfinder mission for ESA in December 2015 marked the end of the Vega development phase and the start of commercial operation.

There are currently nine Vega missions in Arianespace’s order book, a majority of them for EO. One-third of the backlog is for institutional customers and two-thirds for export customers. The nine missions include two contracts signed in 2016: the CERES mission for French DGA defense procurement agency and French space agency CNES, along with the ADM-Aeolus mission for ESA’s Earth observation directorate.

The upgraded Vega C, slated to make its first flight in 2019, will provide a significant performance increase over the current version in terms of payload capacity (weight and volume). This means the rocket will be able to carry out an even wider range of missions, thus improving the launch service competitiveness. Arianespace should be able to start marketing Vega C launches by the end of this year.

Arianespace Chairman and CEO Stéphane Israël said, "With the first Vega launch of 2016, and the seventh since its introduction in the Guiana Space Center, Arianespace has proudly served – on a single mission – both the Peruvian government, through its space agency CONIDA, and the operator Terra Bella, a Google company. I would like to thank our long-standing partners, Airbus Defence and Space, our direct customer for PerúSAT-1, and also the manufacturer of this spacecraft; and SSL, manufacturer of the SkySat satellites. I would also like to congratulate the industrial prime contractor, ELV/Avio, for Vega’s excellence and availability, along with the European Space Agency and national space agencies, especially ASI of Italy, for their critical support for the Vega program. And, of cours,e thanks to CNES-CSG and all companies and staff at the launch base, always by our side for new successes. Lastly, congratulations to Arianespace’s own teams for this seventh successful launch of the year: launch after launch we make a difference.”