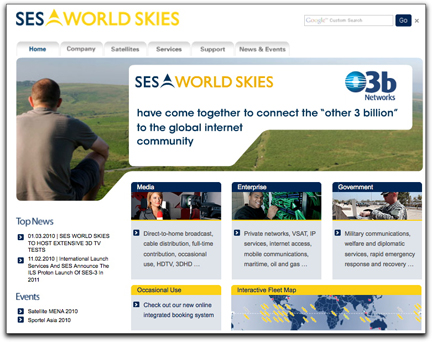 With its 3D-ready satellites and teleports serving as the distribution backbone, SES WORLD SKIES, a division of SES S.A. (Euronext Paris and Luxembourg Stock Exchange: SESG), has announced it plans to join leading broadcasters, programmers, TV makers and technology providers in a series of extensive tests aimed at accelerating the delivery of 3DTV. Planned for this spring, the trials are expected to bring together eight major 3DTV components that will be tested under real-life scenarios in an end-to-end platform.

Participants in the high learning environment will include innovators in content production, formatting, encoding, uplinking and transmission, headend reception, network distribution and display. SES WORLD SKIES' teleports in Vernon Valley, New Jersey and Manassas, Virginia will provide encoding, uplinking and delivery. SES WORLD SKIES will pull on its deep HD expertise as it embarks on a new 3D TV initiative. Together with sister company SES ASTRA, SES WORLD SKIES delivers more HD channels than anyone in the business, and the firm's advanced satellites and HD-PRIME neighborhood have become the defacto home for leading HD content.

"This is a clarion call to anyone doing 3DTV. We have the platform for a whole new dimension of collaboration focused on doing 3DTV right," said Bryan McGuirk, Senior Vice President of Media Solutions for SES WORLD SKIES. "While stereoscopic formats are being debated, the test platform allows everyone from content producers and cable operators to the makers of TVs and 3D glasses to identify firsthand any compatability issues with existing satellite-based video distribution systems."

"There is a lot of work being done in the areas of 3D production and screens, but no one was considering the end-to-end chain and how to distribute 3D TV over the existing infrastructure in the U.S.," explained Alan Young, SES WORLD SKIES' Chief Technology Officer. "New advancements in encoding, encryption, modulation and compression make satellite an extremely relevant player in the delivery of 3D TV."