Newtec's Dialog® VSAT multi-service platform has been selected by broadband satellite operator, Kacific, for that firm's new, High Throughput Satellite, Kacific1, to significantly expand that firm's broadband service delivery in underserved areas of South East Asia, New Zealand and the Pacific Islands — the initial contract is for $10 million of Newtec Dialog hubs and this is expected to result in further terminal procurements totaling several million units during the first years of service. 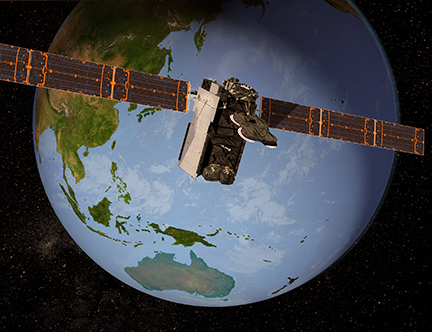 Artistic rendition of the Kacific1 satellite. Image is courtesy of Kacific.

Kacific services enable access to high demand applications, such as community internet access and mobile backhaul, that will help stimulate socio-economic activity throughout the region. Public institutions will benefit from dedicated services including healthcare, education and civil defense, in areas that are beyond the economical reach of terrestrial infrastructures in most of Kacific’s coverage areas. Kacific was recently presented with the Better Satellite World award for its focus on connecting underserved populations. 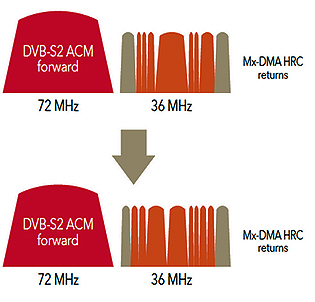 The Mx-DMA waveforms. Image is courtesy of Newtec.

Newtec’s next-generation Mx-DMA return technology incorporates the best features of MF-TDMA and SCPC technologies to provide dynamic bandwidth allocation with the highest level of efficiency. Mx-DMA return technology on the Newtec Dialog platform uniquely adjusts the frequency plan, the symbol rate, the modulation, coding and power in real-time for every terminal in the satellite network in response to traffic demand and Quality of Service (QoS) changes.

Christian Patouraux, CEO and Founder of Kacific, said the Kacific HUB, based on the Newtec Dialog multi-service platform, is a pivotal part of the satellite network. The company selected Newtec because the firm demonstrates the highest performance and ability to offer the highest link efficiencies that are required for Kacific's Ka-band spot beam system. The company also been impressed with other unique features offered by Newtec, such as the Satellite Network Calculator, which enables the company to tailor new services in a highly efficient and fast-to-market manner, which will only help ensure the reliability and enhance the quality of Kacific services to customers.

Thomas Van den Driessche, CEO at Newtec, added that in partnering with Kacific, the company is strengthening the firm's presence in South East Asia and the Pacific. This project bridges the digital divide to people in regions that have never before had access. Among many other features, Newtec's Satellite Network Calculator has an acute ability to provide valuable insight into the performance of the network. The product use in a multi-beam satellite network such as this will allow Kacific to harness these insights to optimize future deployments and add value for their regional partners and customers.