The European Space Agency (ESA) has commissioned Airbus for two studies for possible European involvement in the future human base in lunar orbit. 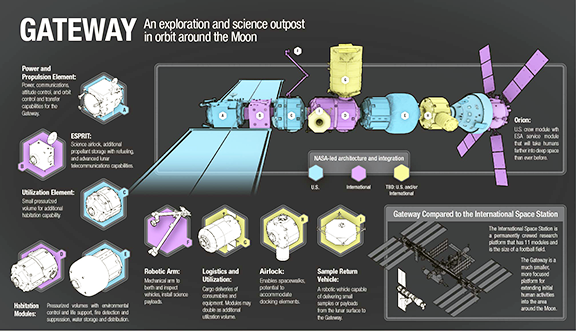 InfoGraphic of the Gateway is courtesy of NASA.

Over the next 15 months, Airbus will develop a concept for a habitation and research module as part of the first study (habitat, approximately 6.5 x 4.5 meters and weighing some 9 tonnes). In the second study, Airbus will design a concept for an infrastructure element for refueling, docking and telecommunications, which will also serve as an airlock for scientific equipment (known as Esprit, around 3 x 3 meters and weighing around 4 tonnes). Both studies will be developed as part of a far-reaching European partnership.

Under NASA's overall design leadership, other elements – such as a second habitat, an airlock for scientific payloads and a logistics module — will be designed by international and commercial partners. NASA has plans to launch the first module - the central power propulsion element (PPE) — into lunar orbit in the early 2020's.

Unlike the International Space Station (ISS), the Gateway is not intended to be continually inhabited. It is envisaged that the lunar platform will act as a staging point for human missions to the Moon or Mars, and testing is planned for a series of technologies and procedures that will be needed.

Airbus will present its initial designs for the Gateway at the International Astronautical Congress (IAC) in Bremen on 3 October 2018.

Oliver Juckenhöfel, the Head of On-Orbit Services and Exploration at Airbus, said that the experience and know-how that ESA and Airbus have gained during flagship projects such as the Columbus space laboratory, the ATV space transporter and the European service module for Orion provide solid foundations for the studies. When developing the new lunar platforms, robotic and human space exploration go hand in hand. Europe has a fantastic track record in both, and these two studies will help to ensure a strong European presence in future space exploration.

David Parker, Director of Human and Robotic Exploration at ESA, added that with these studies and other preparations, ESA aims to stay at the centre of human space exploration. The Gateway will become humanity's most remote research outpost and we hope Europe will benefit from the world of innovation, discovery and excitement that lies ahead.