[SatNews] A joint NOAA/NASA satellite is one of several satellites providing valuable information to aviators about volcanic hazards.

An aviation "orange" alert was posted on August 18, 2014, for Bárðarbunga, a stratovolcano located under the Vatnajökull glacier in Iceland, indicating the "volcano shows heightened or escalating unrest with increased potential of eruption." Much of the information leading to that alert came from satellites including Visible Infrared Imaging Radiometer Suite (VIIRS) instrument on board the National Oceanic and Atmospheric Administration (NOAA)/NASA Suomi National Polar-orbiting Partnership (Suomi NPP). 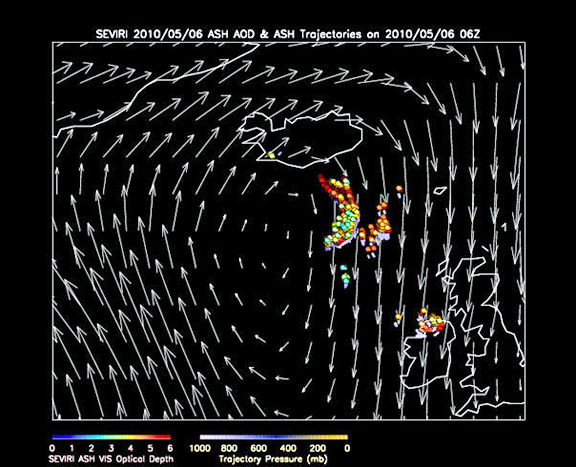 Ash trajectories over Iceland on May 6, 2010, created by the Center for Satellite Applications and Research (STAR).

While the Vatnajökull ice cap and its seismic activity has been gradually increasing over the past seven years, these recent events in Iceland are reminiscent of the destructive aftermath from the 2010 eruption of the Eyjafjallajökull volcano in Iceland. The Eyjafjallajökull eruption caused a six-day travel ban over the controlled airspace of many European countries. Data from NOAA satellites were used in the volcanic ash detection and property retrieval algorithm to create products to be used by the Volcanic Ash Advisory Centers (VAAC), including the London VAAC. The data given to the air traffic control organizations provided the information they needed to make the decision to divert and ground more than 4,000 flights. The ban was in effect to address the possibility of volcanic ash ejection causing damage to aircraft engines and risking human life. This was the largest air-traffic shut down since World War II, costing $1.7 billion in losses for the airline industry, as well as innumerable losses within freight imports and exports; tourism industries and the access to fresh food and essential goods.

Recently, Mike Pavolonis, who is a NOAA scientist from the Center for Satellite Applications and Research (STAR), presented his work on How Weather Satellites are Mitigating Aviation-related Volcanic Hazards during a NOAA event. "Only 10 percent of the world's volcanoes are routinely monitored from the ground, making satellites the only frequently available tool that can reliably identify volcanic eruptions anywhere in the world," Pavolonis said. Advanced analysis of data from polar orbiting and geostationary satellites reduces the probability of a disastrous and/or costly aircraft encounter with volcanic ash and helps to minimize the cost associated with avoiding volcanic ash. 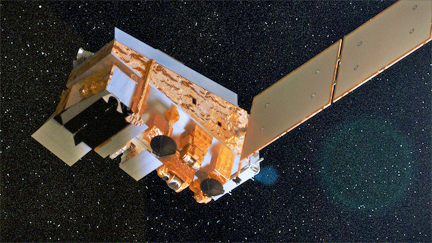 NOAA operates two of the nine Volcanic Ash Advisory Centers—the Anchorage Alaska VACC and the Washington VAAC—that provide operational support to the aviation sector to warn about these hazards for over a decade. He highlighted how volcanic ash can severely impact air travel, melting in a plane engine's combustion chamber and even shutting the engine down completely. This occurred in June 1982, when a British Airways B747 aircraft flew into a volcanic ash cloud from Mount Galunggung (Indonesia) and lost power in all four engines. They dropped from 37,000 feet to 12,000 feet before three engines were restarted and the plane was able to make an emergency landing in Jakarta, Indonesia.

The pilots were unable to see the ash on their radar. Thick, billowing ash clouds from volcanoes often spread out over large areas—well beyond the erupting volcano. Aircraft close calls with volcanic ash have continued over the years. In 2011, U.S. Secretary of State, Hillary Clinton had to cut short a three-nation tour of Africa following a volcano eruption that created an ash cloud over parts of East Africa. These high profile events motivate the work to provide volcanic ash warnings as early as possible after an eruption.

The STAR volcanic ash algorithm takes data from satellites to create actionable information that can assist in advanced warning of volcanic eruptions and ash detection. The addition of the VIIRS instrument aboard the NOAA/NASA Suomi NPP satellite to the STAR volcanic cloud analysis system, has proven to be vital for detecting and characterizing small scale thermal signatures and clouds associated with volcanic activity. These thermal signals can be a precursor to an explosive eruption. The VIIRS instrument is suited to detect the relatively unique spectral signature difference of volcanic clouds often absorb and reflect radiation as a function of wavelength in a manner that is very different from other cloud types. Future plans include incorporating information from Suomi NPP's Cross-track Infrared Sounder and the Ozone Mapping and Profiler Suite instruments into the algorithm.

NOAA's polar satellites are critical for a variety of "nowcasting" capabilities in addition to volcanic ash including imagery to monitor storms, fog, sea ice, and other dangerous weather and environmental conditions as well as providing data for more accurate weather forecasting to secure a more 'Weather-Ready Nation' thereby saving lives and protecting property.

The NOAA infosite may be accessed at http://www.noaa.gov/