A SpaceX satellite launch that had been scheduled for later this month has been postponed amid the coronavirus pandemic.

The SAOCOM1B satellite is being launched for Argentina’s Space Agency, the Comisión Nacional de Actividades Espaciales (CONAE). The launch atop a SpaceX Falcon 9 rocket had originally been scheduled for March 30 at Cape Canaveral Air Force Station.

Argentinian officials cited travel restrictions as the reason for the delayed launch of the Earth observation satellite. "The restrictions imposed by the COVID-19 pandemic could affect the availability of own and external resources for a safe insertion into orbit and subsequent commissioning of the satellite,” explained CONAE in a translated tweet (on the right). 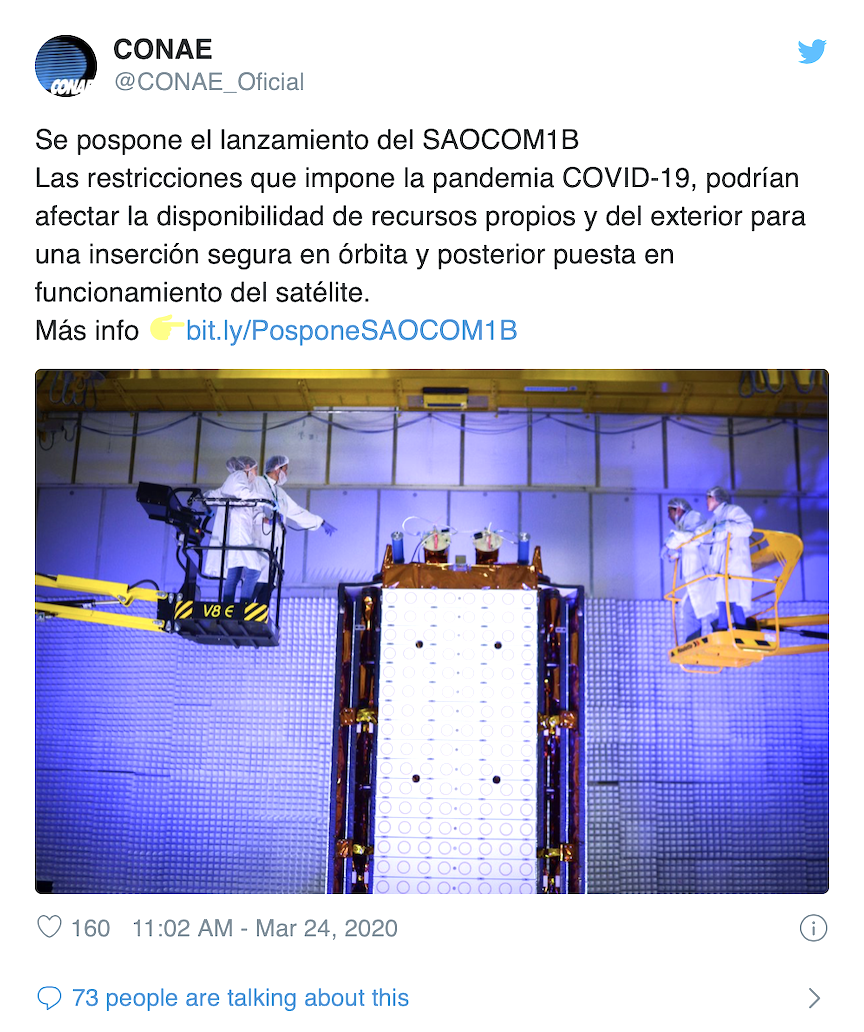 Officials in Argentina are waiting to see how conditions develop before rescheduling the launch. “The authorities of this Commission will await the evolution of the conditions that make it possible to resume activities related to the launch of SAOCOM 1B, and its subsequent insertion into its final orbit in a reliable manner, and according to the originally established plans,” they said in a translated statement.

The impact of the coronavirus outbreak on space exploration programs is being closely followed. Earlier this month, for example, the European Space Agency and the Russian space agency Roscosmos announced that the launch of the second ExoMars mission is being postponed to 2022, in part because of the pandemic.

The European Space Agency also said Tuesday that it is putting eight of its spacecraft into hibernation as it scales down operations during the coronavirus outbreak.

NASA has also temporarily suspended work on the $10 billion James Webb Space Telescope in California due to the coronavirus, putting its spring 2021 target launch date in jeopardy.

The launch will complete the Space Force’s constellation of AEHF satellites, according to United Launch Alliance.Earlier this week, NASA confirmed to Fox News that an employee at NASA’s Kennedy Space Center has tested positive for the novel coronavirus.

As of Wednesday morning, at least 425,000 coronavirus cases have been diagnosed worldwide, more than 55,000 of which are in the U.S. The disease has accounted for at least 18,000 deaths around the world, including more than 800 people in the U.S.

Chris Ciaccia and the Associated Press contributed to this article.