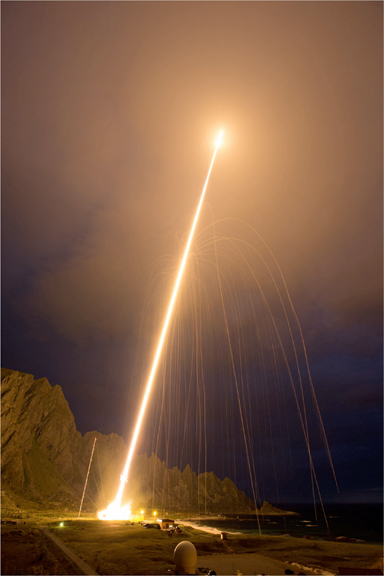 Launch of the Charged Aerosol Release Experiment (CARE II) from Andoya Space Center in Norway, Sept., 16, at 19:06 GMT. Debris of polystyrene thermal cover of payloads rains particles on the launch pad. The rocket carried the radio beacon, chemical release, and instrument payloads to an apogee of 280 kilometers (km) for a dust release on the down leg at 266 km altitude.

[Satnews] The U.S. Naval Research Laboratory (NRL), in collaboration with numerous universities and government laboratories studying the effects of dusty plasmas—charged dust particles that can occur naturally in the mesosphere—generated an artificial plasma cloud in the upper-atmosphere to validate the theory of 'dressed particle scattering' caused by this phenomenon.

The launch occurred just after sunset placing the dust particles in sunlight for easy viewing by cameras in darkness on the ground and with an airborne platform. The large concentration of dust and exhaust material interacted with the ionosphere to produce a so-called 'dirty plasma' with high-speed pickup ions. Visibly seen from the ground, the released dust produces an optical cloud, and, by attaching the electrons in the ionosphere, forms charged particulates. This plasma then generates waves that scatter radar signals used for remote sensing.

"The CARE launch was fully successful," says Dr. Paul A. Bernhardt, CARE principal investigator. "Ground-based radars tracked the effects on the ionosphere for twenty minutes, providing valuable data on how rocket motors affect ionospheric densities. The data will be used to validate simulations of natural disturbances in the upper atmosphere."

The NRL Plasma Physics Division's (PPD) Charged Particle Physics Branch and the University of Washington made measurements with plasma probes and electric field booms on a deployable instrument payload. Ionospheric disturbances were monitored with multi-frequency beacon transmissions from the rocket payload that were detected by a network of ground receivers from the Finnish Meteorological Institute (FMI), Sodankylä Geophysical Observatory (SGO), and NRL PPD. Ground radars and optical instruments that recorded the dust release were provided by the European Incoherent Scatter Scientific Association (EISCAT); Institute of Applied Physics (Germany); Institute of Space Physics, (Sweden); and others. 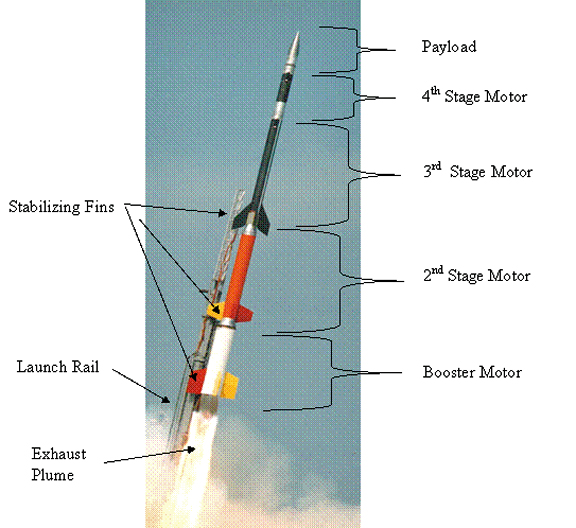 The Black Brant XII rocket stands 65 feet tall and produces about 70,000 pounds of thrust at lift off. The fourth stage does not require fins since it is ignited outside the atmosphere. The 5 Hertz spin rate keeps the rocket stabilized, much like a gyroscope.

The CARE theory effort was based in PPD and the Laboratory for Computational Physics and Fluid Dynamics (LCPFD) at NRL, as well as the Center for Space Science and Engineering Research at Virginia Tech. High frequency receivers were fielded by QinetiQ (UK) and by NRL PPD with stations in Oslo, Tromsö, and the University Center in Svalbard (UNIS).

A CARE data review is scheduled for December 2015 in San Francisco. During this review, Bernhardt says, the scientific results from the experiment will be compared with artificial and natural scatter processes to better understand the physics. Also, a follow-on CARE III experiment will be planned.

The Department of Defense (DoD) Space Test Program sponsored the launch and payload integration for the NRL CARE II mission. The rocket launch, and payload development was provided by the NASA Sounding Rocket Program. The CARE experiments were designed to test the theory of dusty plasma scatter developed by scientists at the University of Tromsö in Norway and NRL PPD.