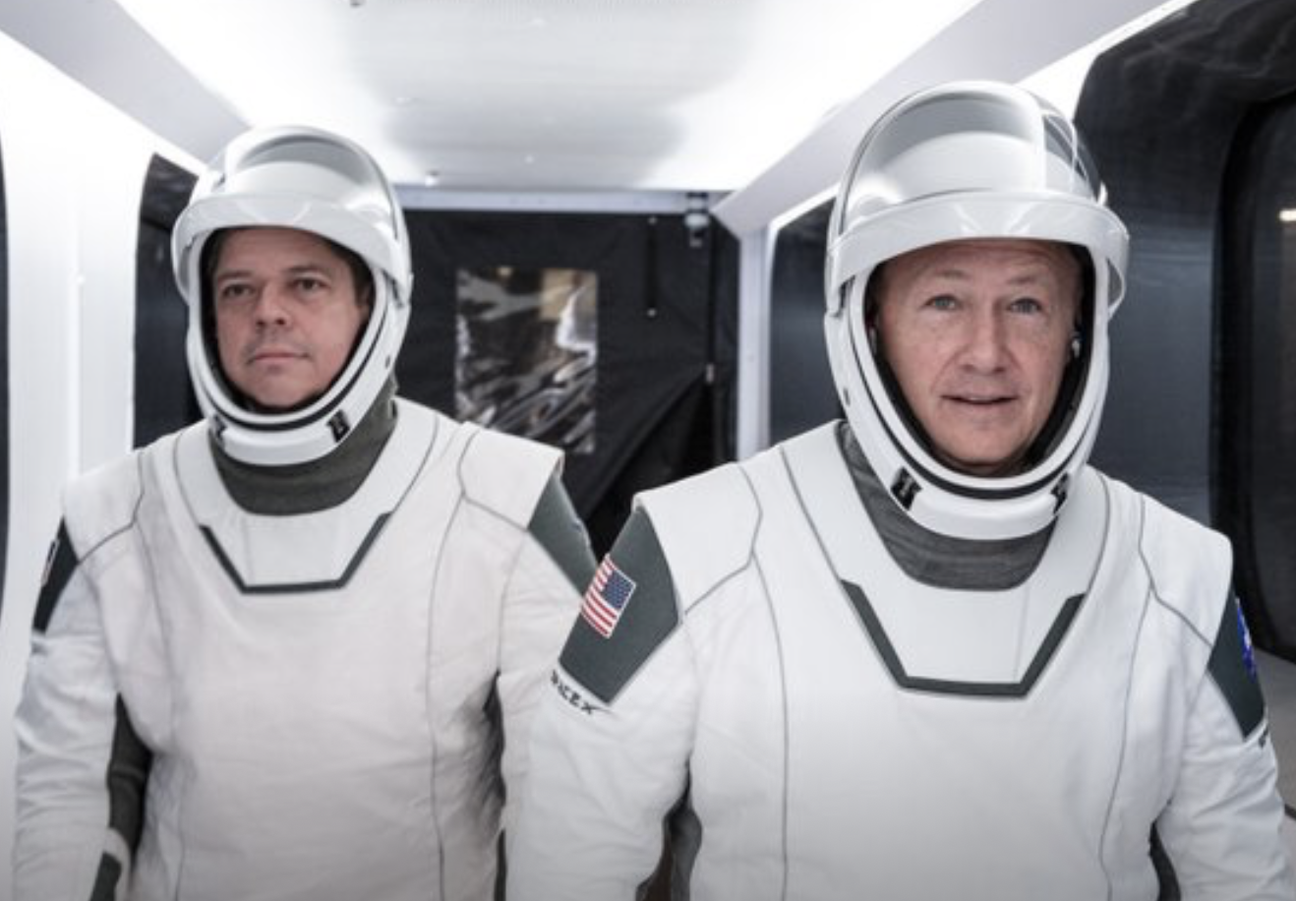 In this January 17, 2020 photo made available by SpaceX, NASA astronauts Bob Behnken, left, and Doug Hurley, wearing SpaceX spacesuits, walk through the Crew Access Arm connecting the launch tower to the SpaceX Crew Dragon spacecraft during a dress rehearsal at NASA's Kennedy Space Center in Cape Canaveral, Florida. For their May 27, 2020 mission, Hurley will be in charge of launch and landing and Behnken will oversee rendezvous and docking at the International Space Station.

It just wasn't meant to happen. As early as last night there were rumors that the weather might put a hold on the first mission since 2011 when the U.S. transported astronauts to the International Space Station (ISS). As the countdown began there was cautious optimism that the clouds, wind and threat of lightning would provide a perfect window long enough for the Dragon to transport NASA astronauts Doug Hurley and Bob Behnken, to the ISS, but with just 16 minutes remaining the no go was announced.

"This is a unique moment where all of America can take a moment and look at our country do something stunning again," NASA Administrator Jim Bridenstine said in a press briefing on Tuesday. 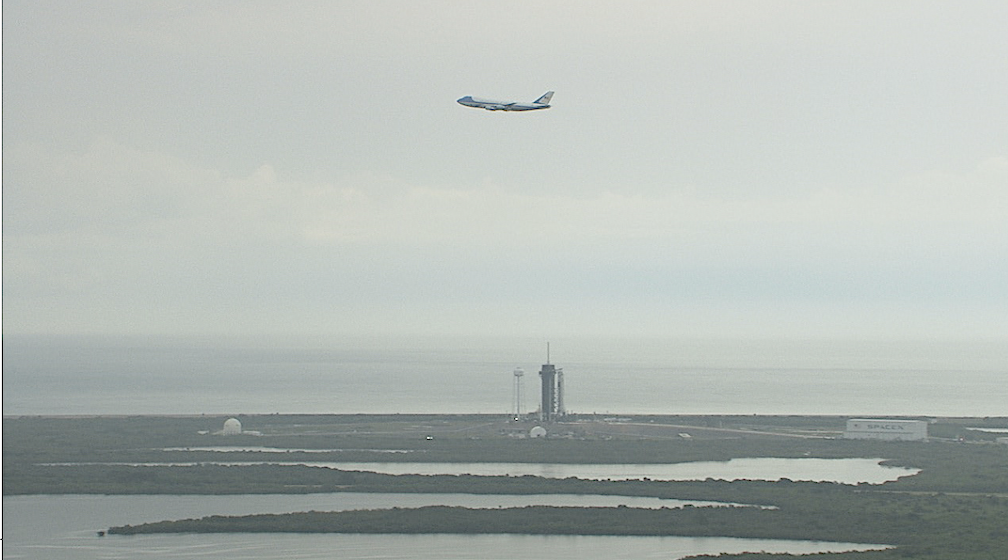 NASA and SpaceX scrubbed Wednesday’s launch attempt of the Demo-2 flight test to the International Space Station due to unfavorable weather conditions around Launch Complex 39A at the agency’s Kennedy Space Center in Florida. Launch has been rescheduled to Saturday, May 30, at 3:22 p.m. EDT. 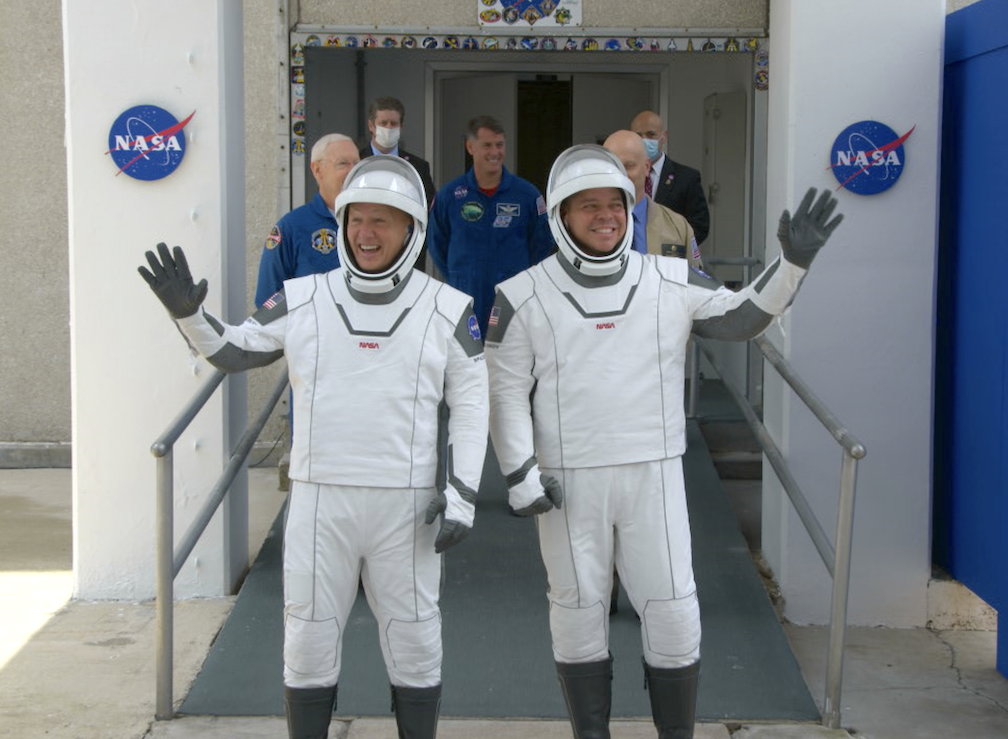 The countdown proceeded smoothly throughout the day Wednesday, with no technical issues raised regarding the SpaceX Falcon 9 rocket or the Crew Dragon spacecraft. NASA astronauts Robert Behnken and Douglas Hurley suited up, walked out of Kennedy’s Neil Armstrong Operations and Checkout Building and rode out to the launch complex in a Tesla Model X before climbing on board the SpaceX Crew Dragon spacecraft a few minutes ahead of schedule.

However, later in the countdown, with operations underway to load the rocket’s propellants and the instantaneous launch window of 4:33 p.m. EDT drawing near, launch weather officials briefed SpaceX Launch Director Mike Taylor that there just wasn’t enough time to wait for weather to improve. Rain, cumulus clouds, attached anvil clouds, lightning and field mill data – which measure the amount of electricity in the atmosphere – all violated Falcon 9 and Crew Dragon launch criteria at times throughout the day.

“There was a concern that if we did launch, it could actually trigger lightning,” Bridenstine said. “We made the right decision.”

SpaceX’s decision to reschedule launch was made with only 17 minutes remaining until the anticipated liftoff time.

“We can see raindrops on the windows,” Hurley said as he and Behnken received the news that weather had prevented a liftoff Wednesday. “We understand everybody’s probably a little bummed out, but that’s part of the deal,” he added.

SpaceX removed propellant from the Falcon 9 rocket, the Crew Dragon’s launch escape system was disarmed and the crew access arm and White Room were returned to position beside the spacecraft’s side hatch. Hurley and Behnken exited the Crew Dragon at approximately 5:50 p.m. and departed to return to the Astronaut Crew Quarters inside the Operations and Checkout Building.

“Everybody did great today,” Hurley said before the crew climbed out of the spacecraft. “It was a good practice, and we’ll do it again on Saturday.”

Today’s launch countdown was a valuable experience, Bridenstine pointed out. 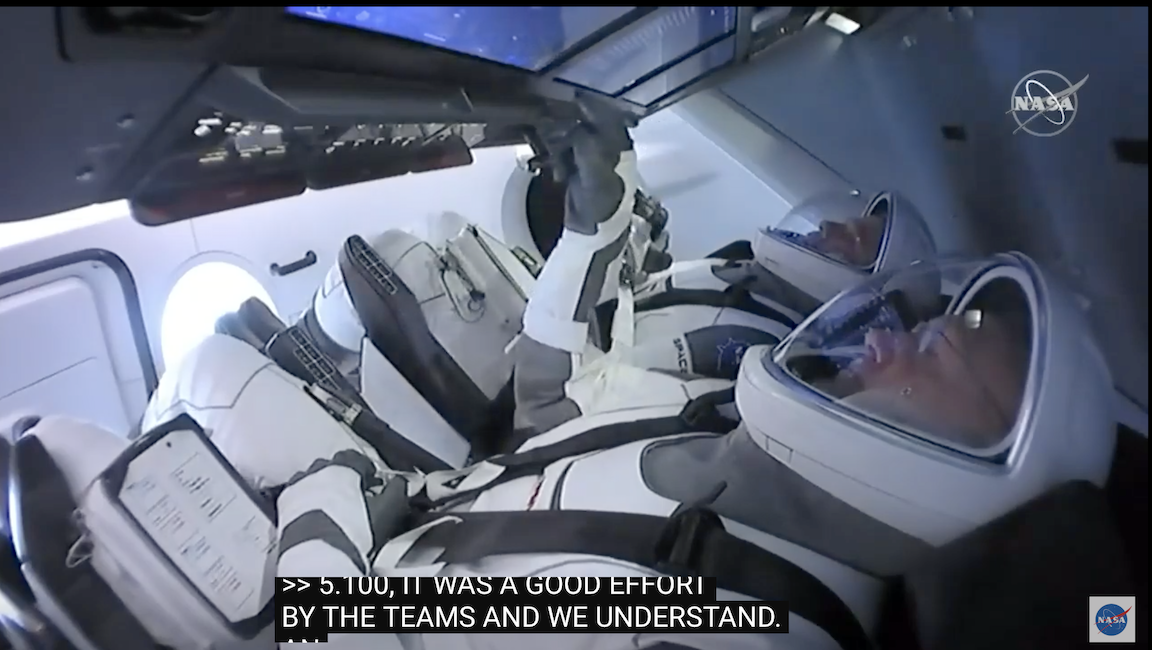 NASA’s SpaceX Demo-2 mission will be an end-to-end test flight to validate the SpaceX crew transportation system, paving the way for its certification for regular crew flights to the station as part of NASA’s Commercial Crew Program. It will be the first launch of American astronauts on an American rocket from American soil in nearly a decade, since the retirement of the space shuttle following its final flight, STS-135, in 2011.

Launch coverage on Saturday, May 30, will begin at 11 a.m. on NASA Television, on the web at and here on the blog.