A December Launch Is Anticipated For India's GSAT-11 Satellite

[Satnews] The first Indian high-throughput satellite GSAT-11 that will pack more data in the same spectrum space is set for December 2016 launch, according to the Deccan Herald. 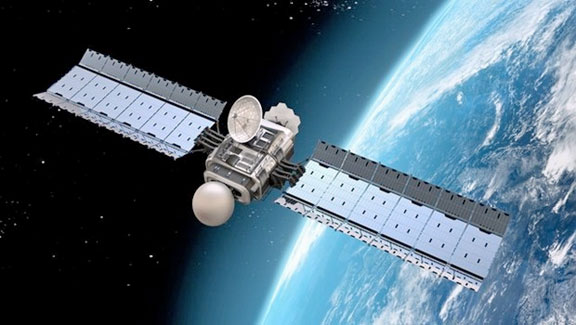 Artistic rendition of the GSAT-11 satellite.

This is a new breed of satellite that will provide many times more capacity than conventional payloads using new technology. Commercial high-throughput satellites such as ViaSat-1 and EchoStar XVII provide more than 100 Gbit per second of capacity, which is more than 100 times the capacity offered by a conventional Ku-band satellite. The GSAT-11 payload will provide a capacity of about 10 Gbps to render broadband connectivity in rural areas. Indian Space Research Organisation (ISRO) plans for more such satellites in future.

Earlier this week, the Union Cabinet approved procurement of launch services and realization of ground segment for GSAT-11 spacecraft at a cost of Rs 1117 crore. With 32 high-power spot beams, GSAT-11 would provide high bandwidth VSAT communication. Because of the 5600 kg lift off mass, the satellite will be launched by a French Arianespace rocket by the close of 2016 ISRO officials told the Deccan Herald. The ground segment is being realized to address the rural communication requirements.

Almost simultaneously, the ISRO will attempt to park another communication satellite in the 36,000 km geo-synchronous orbit, using indigenous GSLV rockets. If this experiment—and the follow up launches—are successful, then India in the future would not have to pay foreign exchanges to launch the nation's heavy communication satellites.