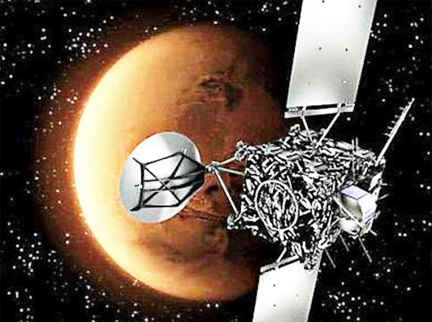 Artistic rendition of Yinghuo-1 satellite
[SatNews] Early next month the next satellite launch can be expected by China...

China's first Mars probe will be launched between November 8th and November 20th, after being delayed for two years, a top scientist said. Yinghuo-1, a micro-satellite weighing 110 kilograms, will be sent into space with Russia's Phobos-Grunt mission from the Baikonur Cosmodrome launch site in Kazakhstan. The probe is expected to enter a preset orbit around Mars between August and September next year, said Wu Ji, director of the National Space Science Center under the Chinese Academy of Sciences. China News Service, citing the Russian Federal Space Agency, expects the launch to actually occur on November 9th.

The project is expected to lead China further into deep space exploration, following two successful lunar probe projects since 2007. Wu, who has designed scientific goals for the project with his colleagues, said Yinghuo-1 has been safely transported to the launch site, and a check showed everything is fine. The mini-satellite's scientific goals include exploring Mars' space environment, and relaying back the first images of Mars taken by a Chinese satellite. On board the probe are a magnetometer to explore Mars' magnetic field, a device to explore its upper atmosphere, and two cameras to take photos of the Red Planet for studying dust storms and their impact on the upper atmosphere, he said.

Russia's Phobos-Grunt mission will land on the Martian moon Phobos, collect geological samples and return them to Earth in three years. The mission was set for October 2009, but was postponed to this year to enhance the reliability of the project. Russian space officials explained that in 2009 scientists needed more time to study Phobos' surface and design better facilities to collect soil samples from Phobos.

Earlier reports said Yinghuo-1 will travel 350 million kilometers in 11 months before separating from the Russian landing craft to enter the planet's orbit. It is expected to circle around the planet for one year. China is expected to complete a deep space network by 2016, including two domestic monitor and tracking stations and a third in South America, Qian Weiping, a top scientist in the field, said earlier. (Source: China Daily)