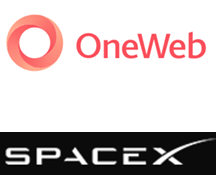 OneWeb and SpaceX are the two most advanced ‘mega-constellations’ in terms of planning – and launching – broadband satellites, as stated by journalist Chris Forrester in his recent posting at the Advanced Television infosite.

OneWeb’s initial ambitions are modest, at 600 or so, satellites. SpaceX has much greater ambitions for its ‘Starlink’ fleet and is talking about a possible 42,000 craft over time.

However, there is no love lost between the two arch-rivals. OneWeb’s VP/Regulatory Affairs, Ruth Pritchard-Kelly, speaking at EU Space Week in Helsinki, Finland, and quoted by specialist news-site Space Intel Report, accused SpaceX of sending satellites into space which were – at least in some cases – demonstration craft.

SpaceX has admitted that of their first batch of 60 craft some failed fairly rapidly. OneWeb’s Pritchard-Kelly told the event that while it had only launched six craft, they were all working.

The conference also heard complaints that SpaceX’s constellation was already ruining the night sky for astronomers. Pritchard-Kelly said that SpaceX should have thought about the amount of reflection given off by the Starlink craft, describing the company’s approach as “thoughtless” and stressing that OneWeb had spoken to the astronomy community prior to launching anything into orbit.