NASA... The Dawing Of The Age Of Aquarius... (Satellite)

[SatNews] An international spacecraft that will take NASA's first space-based measurements of ocean surface salinity has arrived at its launch site at Vandenberg Air Force Base in California.

The Aquarius/SAC-D mission will provide scientists with a key missing variable in satellite observations of Earth that links ocean circulation, the global balance of freshwater, and climate. The Aquarius/SAC-D spacecraft left Sáo José dos Campos, Brazil, on March 29. Following final tests, the spacecraft will be attached to a Delta II rocket for a June 9th launch. The mission is a collaboration between NASA and Argentina's space agency, Comisión Nacional de Actividades Espaciales (CONAE), with participation from Brazil, Canada, France and Italy. Aquarius, the NASA-built primary instrument on CONAE's SAC-D spacecraft, will map global changes in the concentration of dissolved salt at the ocean surface. Measuring salinity is important to understanding how changes in rainfall, evaporation and the melting or freezing of ice influence ocean circulation and are linked to climate changes. The three-year mission will provide new insights into how variations in ocean surface salinity relate to these fundamental climate processes.

"Just as salt is essential to life as we know it, salinity is crucial to Earth's climate system," said Aquarius principal investigator Gary Lagerloef of Earth and Space Research in Seattle. "Very small changes in salinity can have large-scale effects on ocean circulation and the way the ocean moderates our climate. These changes are linked to the movement of water between the ocean, atmosphere and cryosphere." Aquarius will greatly enhance the quantity of ocean salinity measurements that have been collected from ships, buoys and floats. "When combined with data from other sensors that measure sea level, ocean color, temperature, winds, rainfall and evaporation, Aquarius' continuous, global salinity data will give scientists a much clearer picture of how the ocean works, how it is linked to climate and how it may respond to climate change," Lagerloef said.

Precise salinity measurements from Aquarius will reveal changes in patterns of global precipitation and evaporation, and show how these affect ocean circulation. Studies from Aquarius eventually will improve computer models used to forecast future climate conditions, including short-term climate events such as El Nino and La Nina. Aquarius will measure ocean surface salinity by sensing thermal microwave emissions from the water's surface with a radiometer. When other environmental factors are equal, these emissions indicate how salty the surface water is. Because salinity levels in the open ocean vary by only about five parts per thousand, Aquarius employs new technologies to detect changes in salinity as small as about two parts per 10,000, equivalent to about one-eighth of a teaspoon of salt in a gallon of water. Flying in a 408-mile high, polar orbit, Aquarius/SAC-D will map the global ocean once every seven days. Its measurements will be merged to yield monthly estimates of ocean surface salinity with a spatial resolution of 93 miles. The data will reveal how salinity changes over time and from one part of the ocean to another.

Aquarius is a NASA Earth System Science Pathfinder Program mission. The Aquarius instrument was jointly built by JPL and NASA's Goddard Space Flight Center in Greenbelt, Md. NASA's Launch Services Program at the Kennedy Space Center in Florida is managing the launch. JPL will manage Aquarius through the mission's commissioning phase and archive mission data. Goddard will manage the mission's operations phase and process Aquarius science data. CONAE is providing the SAC-D spacecraft, an optical camera, a thermal camera in collaboration with Canada, a microwave radiometer, sensors developed by various Argentine institutions, and the mission operations center in Argentina. France and Italy also are contributing instruments. 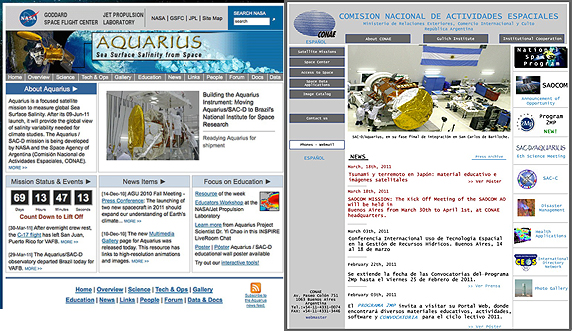