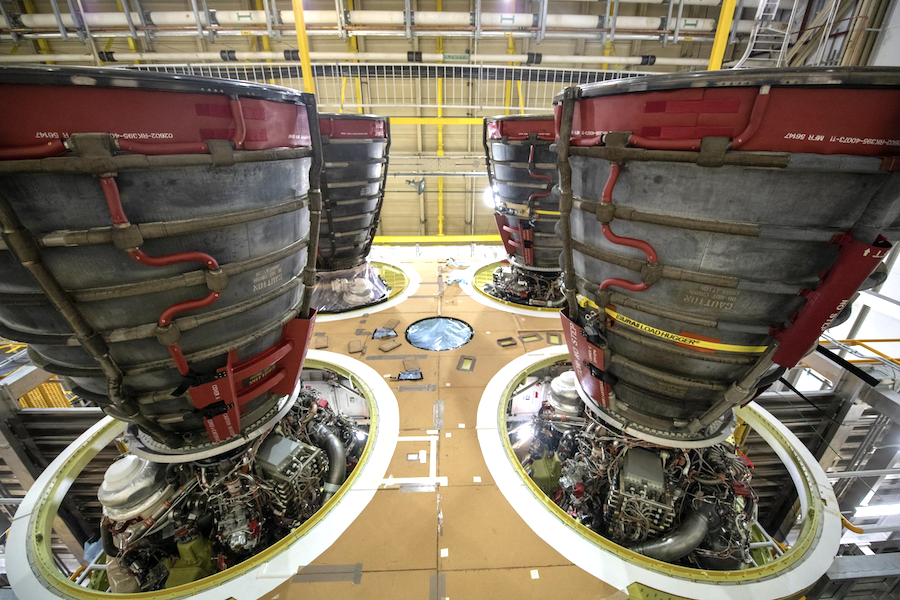 NASA has awarded a contract to Aerojet Rocketdyne of Sacramento, California, to manufacture 18 additional Space Launch System (SLS) RS-25 rocket engines to support Artemis missions to the Moon. The four RS-25 engines, shown here, are attached to the SLS core stage that will send the Artemis I mission to the Moon. Currently, the stage is undergoing a series of Green Run tests in a test stand at Stennis Space Center near Bay St. Louis, Mississippi. The additional engines will support future SLS flights to deep space. Credits: NASA/Jude Guidry

A big contract for some more of this company's big engines has been awarded by NASA to Aerojet Rocketdyne of Sacramento, California. NASA has the need for Aerojet to manufacture 18 additional Space Launch System (SLS) RS-25 rocket engines to support Artemis missions to the Moon that will cost $1.79 billion. This includes labor to build and test the engines, produce tooling and support SLS flights powered by the engines.

This modifies the initial contract awarded in November 2015 to recertify and produce six new RS-25 engines and brings the total contract value to almost $3.5 billion with a period of performance through Sept. 30, 2029, and a total of 24 engines to support as many as six additional SLS flights.

John Honeycutt, the SLS program manager at NASA’s Marshall Space Flight Center in Huntsville, Alabama said that this contract allows NASA to work with Aerojet Rocketdyne to build the rocket engines needed for future missions. The same reliable engines that launched more than 100 space shuttle missions have been modified to be even more powerful to launch the next astronauts who will set foot on the lunar surface during the Artemis missions.

Each SLS rocket uses four RS-25 engines, providing a total of 2 million pounds of thrust to send SLS to space. The SLS rocket leverages the assets, capabilities, and experience of NASA’s Space Shuttle Program, using 16 existing RS-25 shuttle engines for the first four SLS missions. These engines were updated with new controllers, the brains that control the engine, and upgraded and tested to fly at the higher performance level necessary to launch the SLS, which is much larger and more powerful than the shuttle.

The rocket engines are mounted at the base of the 212-foot-tall core stage, which holds more than 700,000 gallons of propellant and provides the flight computers that control the rocket’s flight. The engines for the Artemis I mission to the Moon have already been assembled as part of the core stage, which is undergoing Green Run testing.

Johnny Heflin, the SLS engines manager added that they’ve already begun production on the first six new RS-25 engines. Aerojet Rocketdyne has restarted the production lines, established a supplier base and is building engines using advanced techniques that reduce both the cost and time for manufacturing each engine.

The engines are built at Aerojet Rocketdyne’s factory in Canoga Park, California. Working with NASA, Aerojet has implemented a plan to reduce the cost of the engines by as much as 30 percent by using more advanced manufacturing techniques to modify some of the rocket components. Some of these modified components have already been tested during engine tests that replicate the conditions of flight. The new digital controllers are built by Honeywell Aerospace in Clearwater, Florida,  a major subcontractor to Aerojet Rocketdyne.

The SLS rocket, Orion spacecraft, Gateway and Human Landing System are part of NASA’s backbone for deep space exploration. Work is well underway on both the Artemis I and II rockets. The Artemis I core stage and its RS-25 engines are in the B-2 test stand at NASA’s Stennis Space Center near Bay St. Louis, Mississippi. Here, the stage is undergoing Green Run testing, an integrated test of the entire new stage that culminates with the firing of all four RS-25 engines. Upon completion of the test, NASA’s Pegasus barge will take the core stage to NASA’s Kennedy Space Center in Florida where it will be integrated with other parts of the rocket and Orion for Artemis I.

The Artemis program is the next step in human space exploration. It’s part of America’s broader Moon to Mars exploration approach, in which astronauts will explore the Moon and experience gained there to enable humanity’s next giant leap, sending humans to Mars.

For more information about SLS visit: