Ball designed and built the JPSS-1 spacecraft, the Ozone Mapping and Profiler Suite-Nadir instrument (OMPS), integrated all five of the satellite's instruments, and is performing satellite-level testing and launch support. JPSS-1 will launch aboard a United Launch Alliance Delta II rocket from Vandenberg Air Force Base. 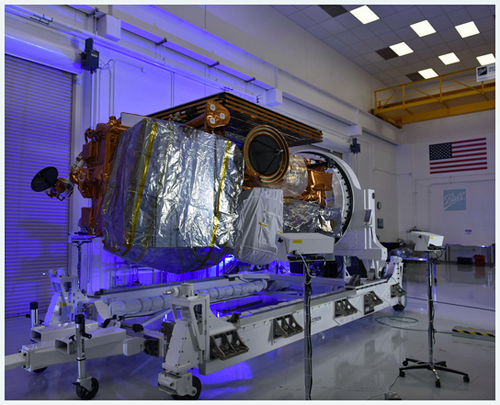 The JPSS-1 satellite. Photo is courtesy of Ball Aerospace.

The JPSS series of polar-orbiting weather satellites will work as the foundation of NOAA's operational environmental forecasting system for the next 20 years. The JPSS missions are funded by NOAA to provide global environmental data in low-Earth polar orbit. NASA is the acquisition agent for the flight systems, launch services and components of the ground segment. JPSS data increases the timeliness and accuracy of numerical forecast models three to seven days in advance of severe weather events. These forecasts allow for early warnings and enable agency managers to make informed decisions to protect American lives and property.

Following launch, JPSS-1 will join the Ball-built NOAA/NASA Suomi NPP satellite, which has served as NOAA's primary operational satellite for global weather observations since May of 2014. Together, the two satellites, each circling the Earth 14 times per day, will provide global observations for U.S. weather and environmental predictions.

According to Rob Strain, President, Ball Aerospace, the arrival of the spacecraft at Vandenberg is a tremendous milestone for the program and the culmination of excellent collaboration and hard work by the JPSS-1 team — NOAA, NASA, Ball, Harris, Raytheon and Northrop Grumman. This advanced weather satellite will play a significant role in providing actionable environmental intelligence to decision makers in government and business, and to the general public.