Link Microtek has designed and fabricated a complex microwave feed assembly for use in a customer’s Ku-band mobile satellite-communications antenna system. 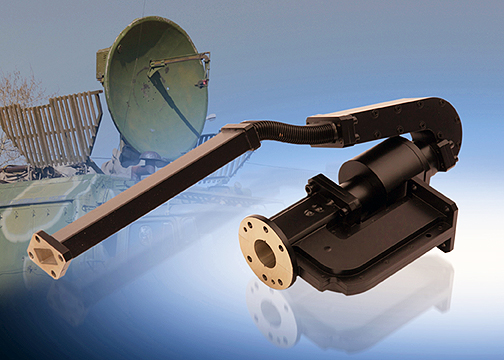 The Link Microtek assembly incorporates a feed arm, transmit and receive filters, a rotary joint and an orthomode transducer (OMT). In addition to satisfying the tight space constraints imposed by the compact nature of the antenna system, the feed assembly had to achieve strict performance criteria regarding low transmission losses and cross polarization, as well as high isolation between transmit and receive channels.

The feed arm is formed of WR75 waveguide to handle the Ku-band frequency ranges of 13.75 to 14.5GHz for transmit and 12 to 13GHz for receive. This is linked via a length of semi-rigid waveguide to a transmit filter, which bends round to interface to the rotary joint – the purpose of which is to accommodate one of the degrees of movement as the foldaway SATCOM system unfurls once in situ.

The simple external appearance of the rotary joint masks the complexity of its internal design, which consists of over 40 separate precision-engineered parts, including connectors, pins, cages, spring mounts and bearings. On the other side of the rotary joint is the OMT. The function of this device is to separate the transmit and receive signals, and in conjunction with the receive filter the OMT achieves an impressive isolation figure of over 100dB.

Steve Cranstone, Link Microtek’s Managing Director, said the integrated feed assembly plays a crucial role as it interfaces with the system’s transmit amplifier, conical feed horn and receive LNB. It was certainly no easy task to bring together the various elements of the assembly and ensure that as a whole it delivered the requisite performance and reliability.

Steve Cranstone again: “While this was an extremely complicated and challenging project, our experienced engineering team was able not only to design and build the individual elements but also to integrate them successfully to meet all the stringent specifications demanded by such satcom applications.”