Rocket Lab has flown a fully Autonomous Flight Termination System (AFTS) for the first time on an Electron launch vehicle.

The AFTS flown on the company’s most recent mission, ‘Running Out Of Fingers,’ makes Rocket Lab one of only three U.S. launch companies to fly with an autonomous system. 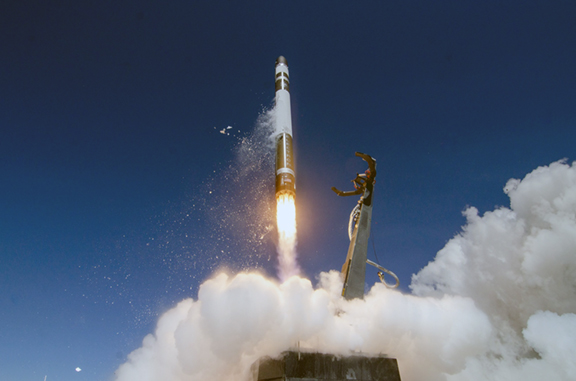 The Electron launch of Rocket Lab's "As the Crow Flies" mission. Photo is courtesy of Sam Toms and Simon Moffatt.

‘Running Out Of Fingers’ hosted the first fully autonomous system on Electron. The launch followed four ‘shadow’ flights where the AFTS unit was flown on the vehicle for testing while traditional ground-based flight termination infrastructure remained in place. With the first fully autonomous mission now complete, all future Electron missions from Launch Complexes 1 and 2 will fly with the AFTS.

The system makes flight termination decisions autonomously by using redundant computers that track the launch vehicle using Global Positioning System and on-board sensors, combined with configurable software-based rules, that identify where the rocket can safely fly. If a rocket goes off course the AFTS will issue a command to terminate the flight by shutting down the engines. The AFTS also delivers faster response times and improved monitoring as launch vehicle travels downrange, providing over-the-horizon tracking capabilities that are not limited by line-of-sight tracking such as that required by ground-based instrumentation at the launch site.

Rocket Lab Founder and CEO, Peter Beck, said the AFTS is yet another way Rocket Lab is innovating to increase the pace of launch and support responsive launch capability for small satellites. As the company moves to an autonomous system, Rocket Lab thanks the dedicated teams from White Sands Missile Range and Alaska Aerospace Corporation who have provided ground-based flight termination system support for Electron missions since the firm's first launch in 2017. Their support has ensured the safety of every Electron mission and they have contributed to Rocket Lab's record of mission success for customers.

Naomi Altman, Rocket Lab’s Avionics Manager and Project Lead for the AFTS program, added that for AFTS to be part of Electron’s 10th launch was the cherry on top of a monumental year for the entire team. Reaching this milestone is also testament to the ongoing support of government agencies and contractors who worked closely with Rocket Lab to bring the AFTS online.