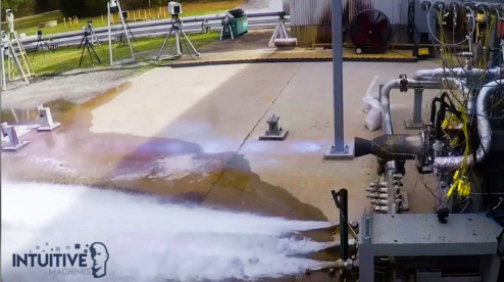 During the record-breaking 10-minute duration test, the VR3500 ran at full throttle for approximately 540 seconds and spent the other 60 seconds performing demonstrations of mixture ratio and deep throttling excursions, including throttling as low as 10 percent power level. The duration, throttle level, and measured performance all exceeded representative mission requirements for landing on the Moon.

Successful testing at Marshall Space Flight Center marks a major milestone for more than one return mission to the Moon. VR3500 uses the same design concepts and additive manufacturing process as the VR700 engine used on Intuitive Machines’ Nova-C lander scheduled for a robotic return to the Moon in the second half of 2021.

Intuitive Machines Propulsion Lead and engine designer, Rob Morehead, said this test and the entire test campaign at NASA MSFC provided substantial confidence that not only will the engine design meet all objectives for future lunar missions but also the additive manufactured hardware is sufficiently robust for the rigors of space flight. In space, the VR3500 is expected to produce 3,500 pounds of thrust at full power level and as low as 350 pounds at minimum thrust.

Ben Stiegemeier, Intuitive Machines technical director of additive manufacturing, added that working closely with the propulsion team, the company was able to close on a design that pushed the boundaries of what the firm could 3D print, but also delivered exceptional engine performance. The integrated nature of the Intuitive Machines design and advanced manufacturing teams has proved to be a real schedule accelerant.

Dr. Tim Crain, Intuitive Machines VP of R&D offered that he was amazed by the progress the company's propulsion technology team has made in engine design, manufacturing and testing.