[SatNews]  Space debris is becoming an increasingly worrying problem for the space industry—many space-faring nations are taking seriously their responsibility for the stewardship of the space environment and are implementing measures that follow the guidelines of the United Nations' Committee on the Peaceful Uses of Outer Space (COPUOS). 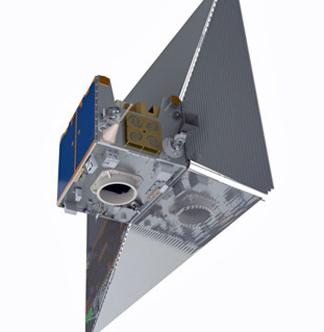 Artistic rendition of the TechDemoSat-1 with
sail extended.

In the U.S., NASA adopted a policy to control the generation of orbital debris. Satellite operators are considering various methods, such as de-orbit sails and tethers, as a way to bring inactive low-Earth-orbit satellites into lower orbits for eventual burn-up in Earth’s atmosphere. Surrey Satellite Technology Ltd.'s (SSTL) science and technology demonstration mission TechDemoSat-1, led by SSTL and scheduled for launch in July this year, will be supporting the COPUOS objectives. At the end of the mission, the satellite’s descent into Earth’s atmosphere will be assisted by one of its eight payloads, a specialized de-orbit sail designed by Cranfield University’s Space Group Team.

The de-orbit sail is the product of several years of Cranfield University’s work on sustainable approaches to space exploration. The TechDemoSat-1 mission gave the Cranfield team the unique technology demonstration opportunity to take on the challenge of evolving their ideas from designs on paper to flight-ready hardware. Maintaining a low mass and low volume is always a challenge with space projects; the TechDemoSat-1 de-orbit sail is made from a material called Kapton®, which is just one thousandth of an inch, or 25 microns, thick.

The sail will be deployed when the mission team issues a command to TechDemoSat-1 at the end of its mission. This command will trigger cable cutters to be fired, which will release a restraining belt, and the sail will then be deployed by stored spring energy. The effect of atmospheric drag on the sail will cause the satellite to slow down and descend into Earth’s atmosphere to disintegrate. The system is designed to de-orbit the satellite within 25 years; however, the exact length of time it will take for the satellite to reenter the atmosphere will be influenced by factors such as solar activity and space weather, and the altitude at which TechDemoSat-1 is flying when the sail is deployed.

The performance of Cranfield’s de-orbit sail will be a subject of great importance to those interested in the management of space debris and the continuation of safe exploration and utilization of Earth orbit space environment.

The SSTL infosite is located at http://www.sst.com/

Cranfield University's infosite may be accessed at http://www.cranfield.ac.uk/