The IOD-1 GEMS satellite was aboard the International Space Station resupply mission NG-11. The mission is part of the In-Orbit Demonstration (IOD) Program, funded by Innovate UK and managed by the Satellite Applications Catapult. 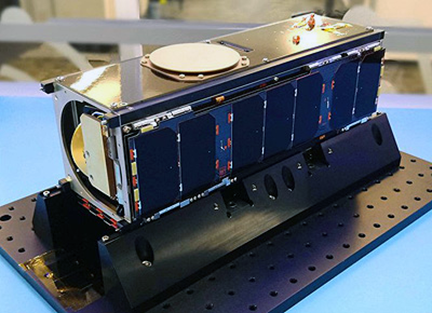 After deployment, the satellite will gather and transmit atmospheric observation data which will be aligned and integrated with other atmospheric and weather datasets at OMS’ International Center for Earth Data (ICED) in Edinburgh.

The IOD-1 GEMS satellite is the first of a planned constellation comprising 48 cubesats that will dramatically improve the temporal frequency of global microwave radiation observations from hours — and even days — to intervals approaching 15 minutes. OMS anticipates launching six additional GEMS satellites during the first months of 2020.

Data collected by the GEMS constellation will be available to commercial, government, and research subscribers from ICED, which aggregates and processes weather information from multiple sources, and provides easily consumable information to its subscribers, sometimes within minutes of collection. The data produced from ICED will have a tangible impact on the lives of millions of people in all areas of the world. This includes improved crop management in the world’s farming communities, safer route planning in the aviation and maritime industries, and better catastrophe risk management in areas where natural disasters are prevalent.

William Hosack, OMS chief executive officer, said launching the IOD-1 GEMS satellite marks several milestones for OMS and the commercial space industry. The company is delighted to contribute the first commercial microwave radiometer and the first 3D-printed antenna for space use to the mission — most importantly, through the support and collaboration with Satellite Applications Catapult and other IOD team members, OMS is now positioned to be a market leader in gathering and delivering actionable comprehensive, accurate, and frequent weather data.