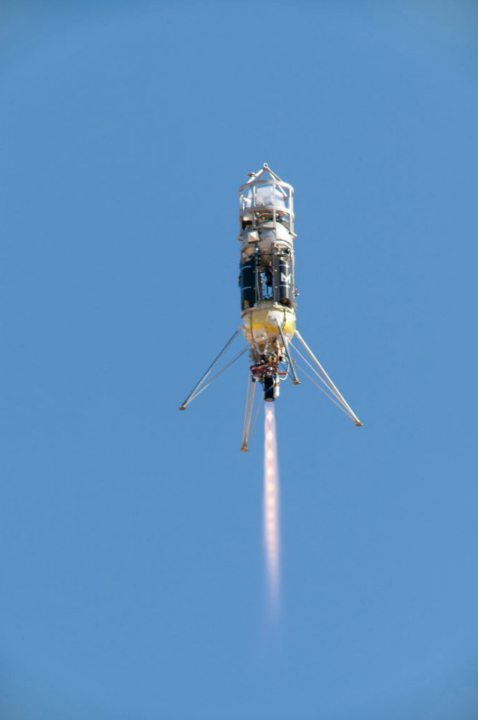 Masten Space Systems has been awarded a contract from the US Air Force to change the way supplies are airdropped to frontline Special Operations Forces — the study will explore rapidly landing supplies under rocket power rather than a long, slow fall under a parachute.

Under the Phase 1 award from the Small Business Technology Transfer (STTR) program, and in partnership with Rhea Space Activity and Purdue University, Masten will conduct a feasibility study to produce an initial design for a rocket-powered landing craft, named XERMES, to deliver supplies to frontline units.

The vehicle, based on Masten’s proven Vertical Takeoff Vertical Landing (VTVL) rocket technology, would slow itself from free-fall to a safe landing through an aggressive retro braking burn, pulling above 9 g’s of force, which is twice as much as a typical rocket launch. Once XERMES lands, ground troops will recover the cargo stored onboard and then the vehicle could be reused for another supply drop.

Dave Masten, founder and CTO of Masten Space Systems, said that creating a rugged cargo vehicle for the Air Force fits well within the company’s design philosophy. He noted that the company has always designed landers to be robust. The firm also found that companies are more willing to allow companies to fly their valuable payload when the vehicle has already had dozens of successful flights.

Rhea Space Activity came up with the idea to deliver supplies via a rocket-powered lander after an incident in 2016 when a Special Operations resupply crew was endangered as its aircrew flew 800 feet above a besieged compound to deliver supplies as accurately as possible, taking fire as it passed overhead. Rather than drop payloads from low altitude to achieve high precision, the proposed system would guide itself in from high altitude.

Starting the drop from above 20,000 feet, well out of the range of small arms fire, the lander would freefall to just 500 feet above ground. Then, the vehicle would fire its rocket engine and land within three feet of a designated area. This high-impulse deceleration burn would last only seconds, providing little opportunity for adversaries to intercept or destroy critical supplies.

Steven Collicott, a professor at Purdue University and partner on the contract, said that this project is the latest step in Purdue’s long history of developing innovative space technology and said that from Neil Armstrong to next-generation space habitats, Purdue University has made multiple contributions to the space industry. There’s a certain amount of satisfaction in seeing technology made for a Moon landing come full circle to landing here on Earth.

Rhea Space Activity worked with Masten Space Systems to develop the idea as a parallel application for their current work with lunar landers under the NASA Commercial Lunar Payload System. Masten has been flying rocket-powered landers for over ten years, with more than 600 successful VTVL flights accomplished across five vehicles.

These vehicles have demonstrated high levels of positioning and navigation capabilities including winning both level one and level two of the Northrop Grumman Lunar Lander Challenge X Prize in 2009 with an average landing accuracy of less than 8 inches from the target.

Beau Rideout, an engineer at RSA said that the adaptation of space technology to other applications should be considered more frequently, noting that especially in today’s space industry, where innovative new ideas are being developed continuously, it’s hard to know if one company has solved someone else’s problem. This is especially relevant to conversations between small businesses and the government. Lots of space companies have developed technology that solves this and other problems in national security, such as secure communications, novel sensor devices, and intelligent reconnaissance platforms.

Following the completion of this Phase 1 award, Masten will apply for a Phase 2 contract to bring operational lander hardware to USAF personnel. The Phase 2 effort will include hot-fire tests of the proposed design along with tests of contingency measures to ensure the safety of ground personnel and supplies.