IoT Moves to The Final Frontier — Space... An Analysis by OMDIA

OMDIA, a global technology research company, has released a report that the Internet of Things (IoT) has already conquered the Earth, with billions of devices everywhere—from cars, to factories, to entire cities. Now IoT is blasting off into space, with cumulative satellite connections expected to rise to more than 10 million by 2025.

While satellite IoT will only account for a small proportion of overall IoT connections, it will support critical use cases in industries such as maritime and oil and gas. During the next 10-15 years, standard terrestrial wireless IoT technologies will play a key role in enabling satellite-based IoT connectivity. However, in the near term—or in less than five years—terrestrial wireless technologies will have only minimal impact, accounting for less than 10% of the installed base of satellite-connected IoT devices in 2025, as presented in the chart. 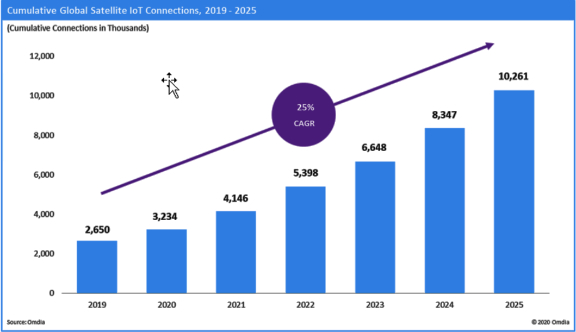 It is important to note that this forecast encompasses directly satellite-connected devices and gateways alone; hundreds or thousands of devices sitting behind the gateway may be potentially excluded.

The new space race
The IoT’s conquest of space has gained momentum over the past year, with the launch of several high-profile ventures that comprise the “NewSpace” movement involving the private spaceflight industry. These ventures, including SpaceX’s Starlink, Amazon’s Project Kuiper, and Softbank-backed OneWeb, are bringing satellite-based broadband Internet access to areas underserved by terrestrial networks.

While some operators, such as Australia’s Fleet Space Technologies, seek to use terrestrial technologies only for local area networking in conjunction with local gateways containing traditional satellite backhaul links, others intend to replace proprietary satellite connectivity links entirely with terrestrial wireless standards. For example, US-based Ligado Networks has the technical capacity now to support connectivity to an NB-IoT or LTE-M IoT end-device directly from a satellite. No intermediate gateway or proprietary backhaul technology is needed.

First, the largest established satellite operators have not jumped on the terrestrial wireless IoT bandwagon. These operators include US satellite companies Globalstar, Iridium, and ORBCOMM, as well French-based Eutelsat and Inmarsat of the UK. Together, the five companies accounted for more than 96% of the installed base of satellite IoT connections in 2019, and growing connections at an annual rate of approximately 16%. This implies that new operators using terrestrial wireless technologies would have to grow astronomically to significantly impact the overall mix of IoT connectivity technologies in the short term.

While Globalstar has won approval to use some of its licensed RF spectrum for private terrestrial networks, established satellite operators are sticking with the traditional proprietary technology approach for satellite-to-ground connectivity. These operators have invested significant capital in their existing networks, which already support a rapidly growing base of paying customers. Given their sunk costs—costs that have already been incurred and cannot be recovered—it is not clear that the operators would benefit from rushing to adopt terrestrial wireless technologies before their current satellites reach end of life.

Third, connecting end-devices directly to satellites using terrestrial wireless technologies is complex and requires an investment in research and development. Fleet makes no attempt at all to undertake such an operation, using LoRaWAN only as a terrestrial technology. For Hiber, its directly connected LoRaWAN devices communicate only in the uplink direction because of interference concerns with the amount of power that Hiber satellites would need to communicate on the downlink in unlicensed ISM band spectrum. Ligado can now support NB-IoT and LTE-M now, benefiting from a massive 22-meter antenna on its GEO satellite, and is working with Ericsson and Sequans on 5G. OQ Technology, meanwhile, is still testing its approach. And Skylo Technologies—technically a reseller but possessing noteworthy intellectual property—claims to have an interesting proprietary approach that utilizes NB-IoT in conjunction with third-party GEO satellites; the company has raised $116 million in venture funding.

Because of the variety of proprietary approaches that exist in using mobile terrestrial technologies for satellite connectivity, the 3GPP standards body that develops protocols for mobile telephony should ensure that the 5G standard addresses connectivity to satellites and other non-terrestrial networks, such as unmanned aerial vehicles. However, support for satellite components in 5G architecture, which should be available with 3GPP Release 17, is not slated to be finalized until September 2021.

Recommendations
Given the overall picture, OMDIA believes that terrestrial wireless technologies will have a long-term, 10- to 15-year-horizon impact on the satellite IoT industry. But owing to technical constraints, such as distance and Doppler shifting, line-of-sight requirements, as well as additional service costs to roam onto the satellite network, satellite will likely never replace terrestrial networks as the first-choice connectivity option for IoT. Nevertheless, we expect that within a 15-year to 20-year time horizon, the distinction between a “satellite IoT” device and a “terrestrial IoT” device will cease, and any device with embedded mobile connectivity will be capable of roaming onto satellite networks when out of range of terrestrial infrastructure.

The distinction will disappear because as the 3GPP works to make 5G—and future “Gs”—compatible with non-terrestrial networks, no net additional device hardware cost will be incurred for a mobile device to roam onto a satellite network when terrestrial networks are unavailable. For many IoT applications, having the ability to roam onto satellite networks when needed will be attractive. Overall, this should shift the satellite industry toward 5G—and beyond—to enable such a backup option for satellite customers, which means that even “satellite-first” IoT connections will increasingly utilize terrestrial wireless technologies.

Ultimately, most stakeholders will treat satellite connectivity as simply another means of getting remote data into cloud-based IoT applications. In contexts where data may have been previously unavailable because the device was out of range of a terrestrial network, it will act as an IoT market growth driver. For mobile network operators specifically, an important opportunity will be available to leverage roaming partnerships with satellite operators and expand the addressable market for their core IoT connectivity propositions.