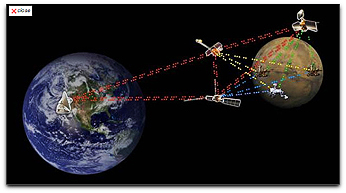 An amazing feat that took 10 years between NASA and Google resulted in a successful test of the first deep space communications network modeled on the Internet from a NASA spacecraft located about 20 million miles from Earth. Working as part of a NASA-wide team, engineers from NASA's Jet Propulsion Laboratory in Pasadena, California, used software called Disruption-Tolerant Networking, or DTN, to transmit dozens of space images to and from a NASA science spacecraft.

"This is the first step in creating a totally new space communications capability, an interplanetary Internet," said Adrian Hooke, team lead and manager of space-networking architecture, technology and standards at NASA Headquarters in Washington.

NASA and Vint Cerf, a vice president at Google Inc., in Mountain View, California, partnered 10 years ago to develop this software protocol. The DTN sends information using a method that differs from the normal Internet's Transmission-Control Protocol/Internet Protocol, or TCP/IP, communication suite, which Cerf co-designed.

The Interplanetary Internet must be robust to withstand delays, disruptions and disconnections in space. Glitches can happen when a spacecraft moves behind a planet, or when solar storms and long communication delays occur. The delay in sending or receiving data from Mars takes between three-and-a-half to 20 minutes at the speed of light.

Unlike TCP/IP on Earth, the DTN does not assume a continuous end-to-end connection. In its design, if a destination path cannot be found, the data packets are not discarded. Instead, each network node keeps the information as long as necessary until it can communicate safely with another node. This store-and-forward method, described as something similar to basketball players safely passing the ball to the player nearest the basket means information does not get lost when no immediate path to the destination exists. Eventually, the information is delivered to the end user.

"In space today, an operations team must manually schedule each link and generate all the commands to specify which data to send, when to send it, and where to send it," said Leigh Torgerson, manager of the DTN Experiment Operations Center at JPL. "With standardized DTN, this can all be done automatically."

Engineers began a month-long series of DTN demonstrations in October. Data were transmitted using NASA's Deep Space Network in demonstrations occurring twice a week. Engineers use NASA's Epoxi spacecraft as a Mars data-relay orbiter. Epoxi is on a mission to encounter Comet Hartley 2 in two years. There are 10 nodes on this early interplanetary network. One is the Epoxi spacecraft itself and the other nine, which are on the ground at JPL, simulate Mars landers, orbiters and ground mission-operations centers.

This month-long experiment is the first in a series of planned demonstrations to qualify the technology for use on a variety of upcoming space missions. In the next round of testing, a NASA-wide demonstration using new DTN software loaded on board the International Space Station is scheduled to begin next summer.