[SatNews] Xplornet Communications Inc. has contracted with ViaSat Inc. (NASDAQ:VSAT) for all of the residential capacity covering Canada on the ViaSat-2 satellite. 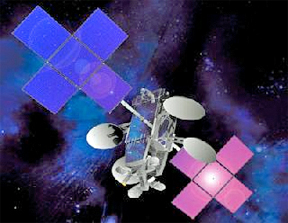 Artistic rendition of the ViaSat-2 satellite.

Already offering high-speed satellite Internet on ViaSat-1, Xplornet will be able to offer faster speeds and more data throughput for its customers with the doubling of bandwidth efficiency expected from ViaSat-2, which is scheduled for a mid-2016 launch. The commitment is for the life of the satellite and the value is up to $275 million depending on options. In addition to bandwidth capacity for ViaSat-2, Xplornet is purchasing network operations, annual network maintenance, gateways, and ground equipment. The contract also allows Xplornet to order ViaSat Broadband System subscriber terminals.

Allison Lenehan, president of Xplornet Communications Inc., said, “Our investment in the ViaSat-2 satellite will allow Xplornet to meet the future Internet needs of our rural customers throughout the country.”

“The Xplornet team has performed exceptionally in Canada and we are very happy to extend our relationship with them on ViaSat-2,” said Rick Baldridge, president and COO of ViaSat. “Our new satellite is expected to approximately double the bandwidth economics of ViaSat-1 while simultaneously providing a coverage footprint that is seven times larger.”

Boeing Space & Intelligence Systems is building ViaSat-2, which is based on ViaSat’s next generation, Ka-band satellite technology and architecture. ViaSat-2 is expected to be, by far, the world’s highest capacity satellite at the time of launch, achieving an unparalleled mix of capacity and coverage. The new satellite is expected to approximately double the bandwidth economics of ViaSat-1 while simultaneously providing a coverage footprint that is seven times larger. The expected coverage area for ViaSat-2 includes North America, Central America, the Caribbean, a small portion of northern South America as well as the primary aeronautical and maritime routes across the Atlantic Ocean between North America and Europe.

ViaSat-1 is recognized as a disruptive force in satellite broadband, earning a Guinness World Records title as the world’s highest capacity communications satellite. A February 2013 FCC report showed ViaSat’s Exede® U.S. satellite Internet service provider was outperforming all other ISPs in delivering promised speeds to subscribers. The report revealed that 90 percent of Exede subscribers were receiving 140 percent or better of the advertised 12 Mbps speed during peak periods – a major shift from the previous generations of satellite Internet service, which were considered to be a “last resort” for those with no other Internet alternative.

The ViaSat-2 system also includes significant enhancements to the ViaSat Broadband System networking technology and is designed to multiply the speeds offered to a level commensurate with high-speed fiber-to-the-node networks (FTTN).

http://www.viasat.com/">The ViaSat infosite may be reached at.

For more info regarding Xplornet Communications, head over to.