NASA Atlantis Moves Out And Preps For Grande Finale 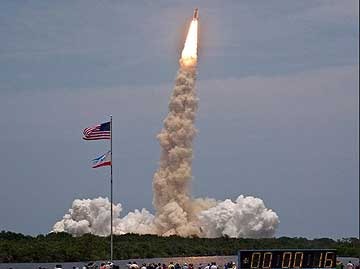 Photo from NASA files
[SatNews] At NASA an era is soon to close on its last chapter.

Space shuttle Atlantis will begin moving to its launch pad at 8 p.m. EDT on May 31, at NASA's Kennedy Space Center in Florida. The six-hour rollout from Kennedy's Vehicle Assembly Building is a major milestone as Atlantis is prepared for the final shuttle launch targeted for July 8

"NASA today said the final space shuttle flight should take place July 8 at about 11:40 am EDT from the Kennedy Space Center in Florida. It will be the 135th and final mission of NASA's storied Space Shuttle Program. NASA said the July date is based on current planning, and an official launch date will be announced following the June 28 Flight Readiness Review. That review of course could delay the flight, since there are a few technical issues to address."Cracked intertank stringers were identified during shuttle Discovery's first launch attempt in November 2010 and delayed its launch until the problem was resolved. X-ray inspection of the intertank stringers provides additional confidence that there are no stringer cracks in Atlantis' tank. The stringers located where the liquid oxygen tank meets the intertank were modified with extra material to add strength and do not require inspection.

During the STS-135 flight to the International Space Station, Atlantis' four astronauts will deliver the Raffaello multi-purpose logistics module filled with supplies and spare parts to sustain station operations once the shuttles are retired.

NASA Television will provide live coverage of the shuttle's rollout. Highlights of the move will air on NASA TV's Video File. For downlink information, schedules and links to streaming video, visit.

There are several non-standard activities, including a tanking test followed by an X-ray inspection of a section of the external fuel tank, which may affect Atlantis' processing. The tank consists of three sections. Mission managers want to X-ray aluminum support beams, known as stringers, located where the liquid hydrogen tank meets the intertank.

The 12-day mission also will deliver an experiment designed to demonstrate and test the tools, technologies and techniques needed to robotically refuel satellites in space, even satellites not designed to be serviced. The crew also will return an ammonia pump that recently failed on the station. Engineers want to understand why the pump failed and improve designs for future spacecraft.

Chris Ferguson, a veteran of two previous shuttle missions, will command the flight. Doug Hurley will serve as the pilot, a role he filled on STS-127 in 2009. Sandy Magnus and Rex Walheim will be the mission specialists. Magnus spent 4.5 months aboard the station beginning in November 2008. Walheim flew on STS-110 in 2002 and STS-122 in 2008.

STS-135 will be Atlantis' 33rd mission and the 37th shuttle flight dedicated to station assembly and maintenance. It will be the 135th and final mission of NASA's Space Shuttle Program.