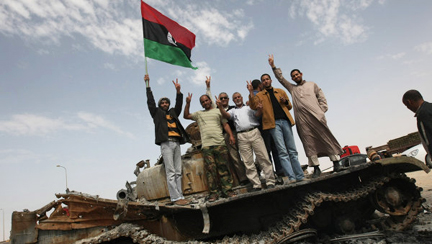 [SatNews] With a big thanks to Andrew Tytla of Really Rocket Science for pointing us in the correct direction, the opposition in Libya gains a TV channel...

The Libyan opposition is launching a satellite television channel, Ahrar TV, on Wednesday with the help of the Qatari government to counterbalance state-controlled media. Libyans have only been receiving information from the media that is controlled by Muammar Gaddafi's government and from foreign satellite television channels, which Tripoli has been jamming in the past few weeks. The new TV channel will go on the air at 7:30 p.m. local time (17:30 GMT) using the Atlantic Bird satellite. The U.S.-based Foreign Policy journal said the Qatari government had provided technical equipment of their culture channel Al-Rayyan to a group of Libyan journalists led by Mahmud Shammam, who arrived in Doha, the capital of Qatar. The Libyan opposition has already launched Radio Free Libya and Radio Free Tobruk on mid-range bandwidths. The downlink is 7 West, 10930 H. (Source: RIA Novosti)