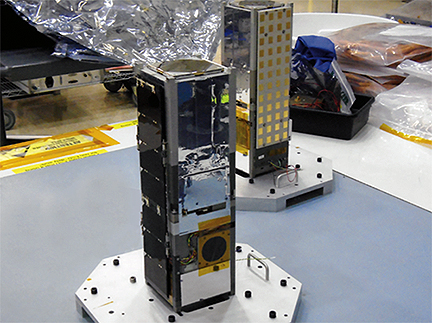 The twin CubeSat Assessment and Test, or CAT, smallsats shown before launch at the Johns Hopkins Applied Physics Laboratory. The CAT CubeSats were launched from the International Space Station (ISS) on January 31. Photo is courtesy of APL.

The Johns Hopkins Applied Physics Laboratory (APL), based in Laurel, Maryland, has successfully established communications with two CubeSats, part of a flight demonstration mission led by APL called the CubeSat Assessment and Test, or CAT, which were launched from the International Space Station (ISS) on January 31.

APL used its 60 foot satellite dish to send and receive data with the two smallsats, launched at 5:28 a.m., and confirmed they were operating as designed at 3:07 p.m. The two CubeSats were among several launched from a NanoRacks CubeSat deployer on the ISS.

The 3U CubeSats are Commercial-Off-The-Shelf (COTS) spacecraft measuring 34 cm long and 10 cm square; each carries a communications payload that was integrated by APL. CAT was delivered to the ISS by the SpaceX CRS-16 Dragon launched by a Falcon 9 rocket from Cape Canaveral Air Force Station, Florida, on December 5, 2018.

Johns Hopkins APL has built and launched 70 spacecraft during the last 60 years. CAT is the next project to demonstrate APL’s heritage of providing trusted and innovative small satellite solutions both rapidly and at low cost.