While the company bested SpaceX to a fourth flight, the firm will likely not surpass them to a fourth recovery, given the loss of the SARGE-SRLV vehicle at T+48 seconds. Exos Aerospace is still in the process of evaluating video and telemetry data; however, it appears a structural failure resulted in an abort and deployment of the recovery system at speeds far beyond its design capability. Exos recovered the vehicle within the flight hazard area and the retrieved hardware confirms that the safety systems performed flawlessly. 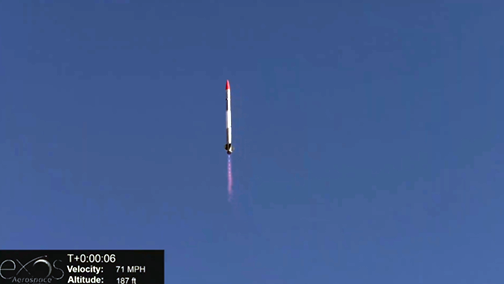 Liftoff of the SARGE rocket.

Photo is courtesy of Exos Aerospace.

This event presents an opportunity to implement the lessons learned from the first three launches of SARGE – S1.  Much has changed in the Industry and supplier base since the company completed the design of this vehicle.

While it may take a little longer to implement the lessons learned and return to flight, the firm's change management will include numerous upgrades that are low risk – high impact. The company will work closely with the FAA and AST on the return to flight plan and relevant submission on the planned vehicle upgrades.

On flights 1-3, Exos Aerospace learned a great deal about the dynamics of the control system along with the complex operations required to launch a reusable liquid-fueled sounding rocket successfully.  Flight 4 confirmed that substantial improvements in the GNC software were incorporated and the new IMU performed as designed.  From observing the air to ground telemetry, indications are good that the vehicle was going to continue to fly well.

Though the company has plans to launch SARGE – S2 in early 2020, the firm will have to beat the onset of high winds in April/May. This event will not impact the transition to LEO and the development of the JAGUAR smallsat launcher that will also benefit from the latest lessons learned.

The company stated they are extremely proud of the team of 12 who flew the same vehicle four times. In that respect, Exos Aerospace stands among two giants in the Industry, SpaceX and Blue Origin.