Japanese-Built Water-Propelled Smallsat to Launch from ISS Next Year 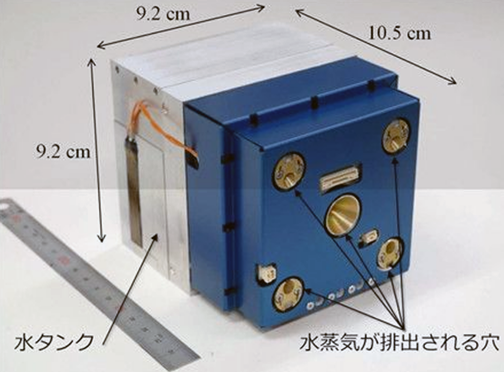 A Japanese research team claims that they are ready to release a water-powered smallsat from the International Space Station.

If the experimental satellite with a microthruster using water as a propellant operates successfully, it would promote the practical use of one- to 10-kilogram cubesats to be released from the ISS in a wide range of fields, from telecommunications to entertainment. The group is led by Hiroyuki Koizumi and Jun Asakawa, Associate Professor and Assistant Professor, at the University of Tokyo.

According to Koizumi and Asakawa, they and their colleagues developed a cubic water-propelled engine roughly 10 centimeters on a side. The thruster uses the vacuum of space to evaporate water within the device, building up pressure. The vapor is then released to create propulsion. They also made an experimental cubesat dubbed AQT-D that is mounted with the innovative tiny propulsion system.

The AQT-D is scheduled to be delivered to the ISS by the Kounotori 8 unmanned cargo spacecraft and released from the Kibo Japanese experiment module at the ISS by March of next year. After the release, the team will check the water-powered engine's performance and orbit adjustment abilities.