Hosted Payload Alliance... The Host With The Most (Organization) 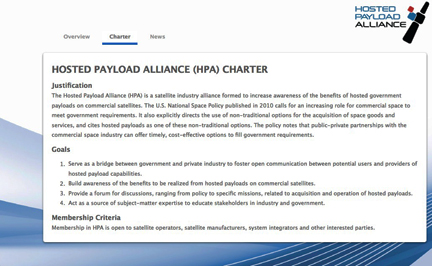 “We believe there is a need for industry and government to work together to facilitate hosted payloads,” said Don Thoma, chairman of the HPA Steering Committee. “An important goal of this group is to act as a source of subject-matter expertise to educate stakeholders in the public and private sectors on the numerous opportunities for hosted payloads on commercial launch spacecraft.”

“The time is right for the formation of the Hosted Payload Alliance,” commented retired U.S. Air Force Gen. Lance W. Lord, former Commander, Air Force Space Command, overseeing the development, acquisition and operation of the services’ space and missile systems. “The 2010 U.S. National Space Policy calls for public-private partnerships with the commercial satellite industry to fill potential gaps, specifically citing hosted payloads, which the public sector might not have the resources to provide. The policy statement also encourages federal departments and agencies to seek out nontraditional arrangements to leverage commercial capabilities. As government funding for important space-based sensor programs continues to be cut or postponed, private industry will be called upon to play an important role in providing affordable and timely capabilities to meet those mission needs.”

Lord noted that wider use of hosted payloads on commercial satellites can provide a timely and cost-effective pathway to space for a diverse range of missions. Applications include communications, Earth observation, remote sensing, research and development, space situational awareness and forecasting electromagnetic solar storms in space. The HPA Steering Committee met to draft a charter and establish goals during the conference in Washington, D.C. The group will hold its first organizational meeting in conjunction with the 2011 National Space Symposium in Colorado Springs on Monday, April 11th.