GeoEye... Delving Into The Disaster (Japan)

[SatNews] When a crisis occurs on the scale of the earthquake and tsunami that devastated Japan, everyone wishes to help.

GeoEye has been supporting the relief efforts by providing its satellite imagery of the devastation in northern Japan to relief agencies, governments and the media. GeoEye's top priority has been to deliver, precise satellite imagery to relief agencies, governments and the media. As soon as the news broke that a major earthquake hit the northern coast of Japan, the GeoEye team quickly began collecting post-earthquake imagery of Japan and provisioning the Company's online web services platform, EyeQ, so GeoEye partners in Japan could use it to aid their country. By sheer coincidence, the first international license for EyeQ was in Japan, and the partner there, Japan Space Imaging, is using EyeQ to help with the massive disaster relief effort.

On March 11, 2011, GeoEye's order management team began directing the firm's high-resolution satellites to collect color imagery over the Oshika Peninsula. IKONOS captured the first post-earthquake image at 10:36 a.m. local time. As of March 21st, GeoEye had provided 29,000 square kilometers of imagery to Google and gave them special permission to load our Japan data into Google Earth Enterprise on the Go on laptops that were provided to first responders traveling from the U.S. to Japan, so they could use the data even where they didn't have Internet connectivity. Additionally, emergency first responders and the geospatial community are using GeoEye imagery as a base map to produce multiple-layer relief maps to assist with damage assessment, route planning, and other crucial aspects of this relief effort. Elite search-and-rescue teams that have flown to Japan from around the world to assist in this enormous relief effort are using this imagery to help locate the missing. Plus, GeoEye's "before-and-after" imagery has given people around the world an instant understanding of the extent of the destruction. We have posted Several new before-and-after "slider" images have been posted on the Company's web site, which reveal the extent of the devastation in Japan. 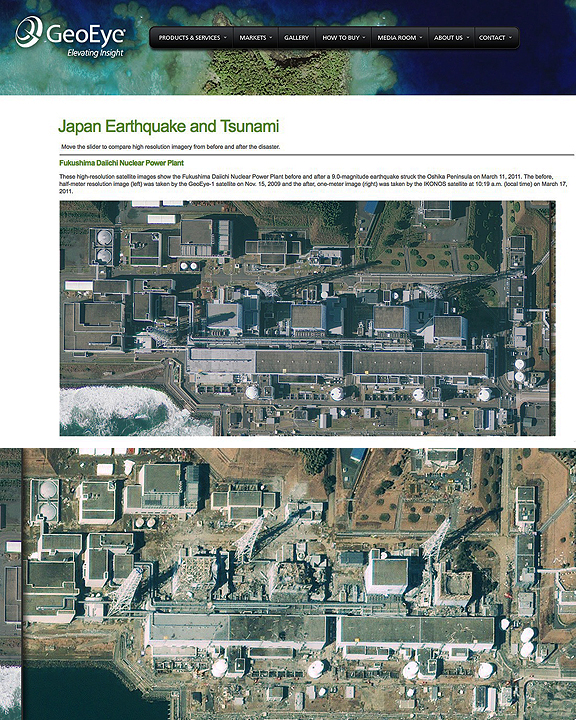 Fukushima Daiichi Nuclear Power Plant — These high-resolution satellite images show the Fukushima Daiichi Nuclear Power Plant before and after a 9.0-magnitude earthquake struck the Oshika Peninsula on March 11, 2011. The before, half-meter resolution image (top) was taken by the GeoEye-1 satellite on Nov. 15, 2009 and the after, one-meter image (bottom) was taken by the IKONOS satellite at 10:19 a.m. (local time) on March 17, 2011.