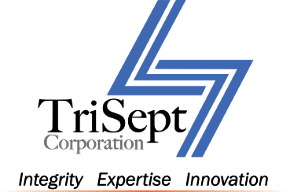 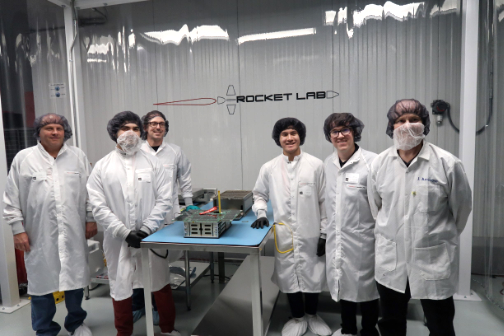 The culmination of an eight-year collaborative research program among BU’s talented electrical and mechanical engineering students and professors, NASA’s CubeSat Launch Initiative (CSLI) will lift the university’s 6U cubesat into LEO. Once in space, this smallsat will initiate measurements of the magnetosphere with onboard sensors, later releasing eight smallsats carrying small magnetometer sensors to track electric currents flowing in and out of the atmosphere.

Josh Semeter, an electrical engineering professor with Boston University’s Center for Space Physics who first conceptualized the ANDESITE mission, said this mission with NASA will demonstrate how cubesats can play a vital role in providing an unprecedented view into the variations of electrical activity racing through space and its impact on lives here on Earth. 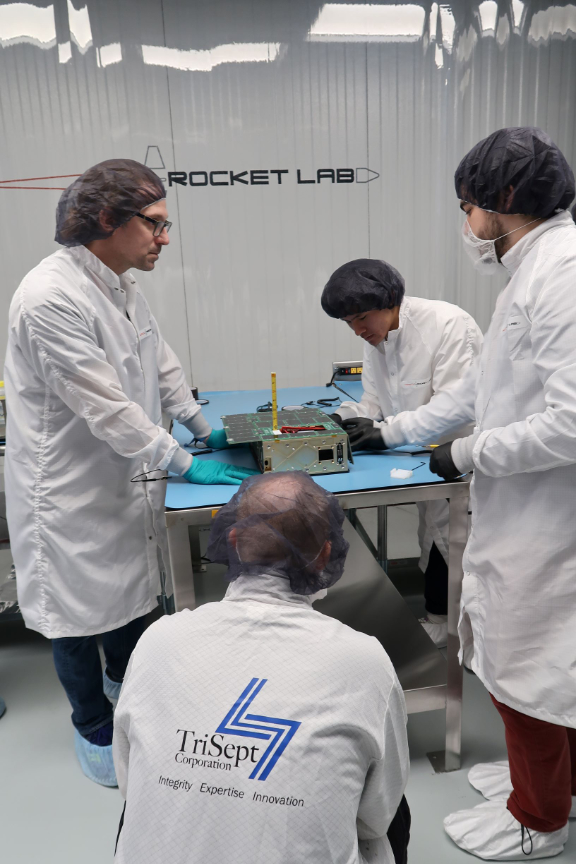 TriSept's Jason Armstrong, center, and the Boston University integration team perform the final procedures during the integration of the ANDESITE payload with the mission dispenser device.

GPS services, for example, can be directly affected. If all goes as planned, the cubesat will release eight smallsat sensors into space to form a first-of-its-kind, free-flying, mesh network capable of delivering uniquely comprehensive data mapping of magnetic fields and space weather to smart phones here on campus.

Like many scientific missions, Boston University’s ANDESITE mission spacecraft and hardware will feature standard electronics components. The mission team estimates the network of satellite sensors, which will drift further apart in space during the experiment, will communicate and deliver data maps of the magnetic field and electric currents in the area for at least two to three weeks and possibly much longer.

When it comes to the name of their mission, students and faculty jokingly claim ANDESITE is one of the longest acronyms they know – Adhoc Network Demonstration for Extended Satellite Inquiries and other Team Endeavors.

Jason Armstrong, TriSept’s Director of Launch Integration Services, added that the company, the University spacecraft team and NASA have completed the initial integration of the ANDESITE mission by installing the cubesat into the dispenser device and preparing the spacecraft for shipment to Rocket Lab in New Zealand. This is an especially gratifying mission that demonstrates what NASA’s ELaNa missions are all about – opening up space access to academia and other scientific groups that otherwise might not be able to fulfill their vision and allow their students to put their experiments to the ultimate test.”

Brian Walsh, a mechanical engineering professor at Boston University who spearheaded the effort to secure the NASA rideshare, remarked that this incredible research and educational opportunity wouldn’t exist without NASA’s CubeSat Launch Initiative (CSLI), and students and programs would be left to speculate how their missions would perform in space. Long before this upcoming milestone mission launch, ANDESITE has helped to launch the careers of Boston University students who contributed countless hours to this breakthrough experiment. Many have gone on to head and support smallsat programs for some of the biggest government agencies and corporations leading the space industry today.

Scott Higginbotham, NASA LSP ELaNa Mission Lead, noted that the agency recently celebrated the monumental deployment of the 100th CSLI selected cubesat mission into space – and that’s amazing. Hundreds of students have benefited from the real-world hands-on experience that designing, building and launching a cubesat provides. This initiative is a critical part of NASA’s efforts to engage with and prepare the next generation of space explorers, and the success and longevity of this program underscores that commitment.”