KVH Industries, Inc., (Nasdaq:KVHI) has announced that Transpetro has selected KVH VSAT connectivity for the majority of the company's tankers.

Brazilian-based Transpetro provides transportation for the state-owned Petrobras oil and gas company. Transpetro chose KVH’s TracPhone® V7-HTS satellite communications antenna system with a five year airtime contract for 45 tankers, a combination of newbuilds and existing tankers. The installations will take place throughout the next 12 months in Brazil, where KVH’s subsidiary, KVH Brazil, has been in operation since 2011. 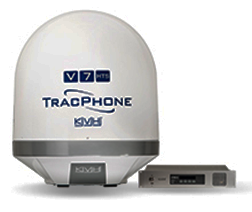 Jose Ricardo Esses, the CIO of Transpetro, said that the company selected KVH for the global coverage and the data speed, which will enable the firm to improve operational efficiency and provide crew welfare. Another deciding factor in selecting KVH VSAT was the ease of use in having one provider for the complete connectivity solution.