[SatNews] During the atmospheric entry phase, the material is built to withstand temperatures of up to 1,850 degrees C before being jettisoned.

Airbus Defence and Space just completed the production of the two heat shields for the first European ExoMars mission in 2016. These shields will protect the Schiaparelli capsule when it descends through the Martian atmosphere. They will be delivered shortly to Thales Alenia Space (TAS), the prime contractor on behalf of the European Space Agency (ESA). 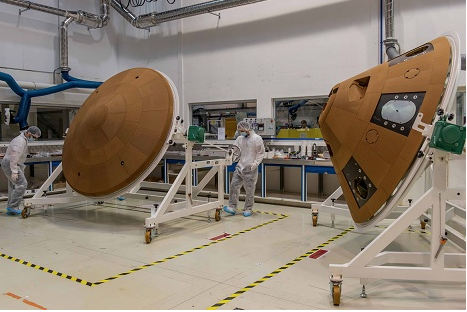 The Schiaparelli shields were developed by the Space Systems teams at Airbus Defence and Space, primarily at its site in Saint-Médard-en-Jalles, near Bordeaux (France). Airbus Defence and Space, as one of the main contributors to the rover of the 2018 ExoMars mission, is responsible for the development of the rover vehicle, in parallel to its work for the 2016 mission. The ExoMars rover will be able to navigate autonomously on the surface of Mars as it searches for the existence of past or present life.

“The Airbus Defence and Space teams have built up unrivaled expertise in the field of planetary exploration, including for example the shield for the Huygens space probe that successfully touched down on Titan in 2005,” said François Auque, Head of Space Systems. “From complex initial studies to proven technology for atmospheric re-entry for the Earth and other planets, we are now working on the next generation of thermal protection materials and systems, which could be used to bring back samples from planets or the space station.”

The Schiaparelli’s front shield, which has a diameter of 2.4 meters and weighs 80 kilograms, is made up of a carbon sandwich structure covered with 90 Norcoat Liege insulating tiles. During the atmospheric entry phase, the material is built to withstand temperatures of up to 1,850 degrees C before being jettisoned. The rear shield, which contains the parachute, deployed during the descent, weighs a mere 20 kilograms and is composed of 93 tiles of 12 different types, affixed to the carbon structure. The probe’s equipment is integrated into the front shield, then covered with the rear shield before final assembly in Baikonur in preparation for launch.

Schiaparelli, also known as the Entry, Descent and Landing Demonstrator Module (EDM), will not only demonstrate Europe’s ability to perform a controlled landing on the surface of Mars, but also carries scientific instruments to improve our knowledge of the Red Planet. In this type of mission, the atmospheric entry phase is crucial, and the front and rear heat shields will be key elements in the demonstration.

The first ExoMars mission is scheduled to begin in January 2016 on a Proton rocket. It will comprise a satellite, the Trace Gas Orbiter (TGO) that will go into orbit around Mars, and a capsule, Schiaparelli, that will enter the atmosphere of Mars before touching down on the Red Planet.